Can you predict agent departures? Yes, by examining patterns of behavior. Here’s how.

Volumes of articles have been written about why agents chose to leave their broker and join a new company. Most say the broker is not upholding their value proposition through design, or they cite mismanagement. What kind of agents react to these changes? Who is more primed to jump for a new opportunity? Who will ride it out? Relitix developed a sophisticated AI system for predicting agent departures by examining patterns of behavior, but it’s also helpful to get a sense of mobility by looking at more obvious agent characteristics.

We analyzed agents in two markets to get some answers to these questions. It turns out that there are a couple of factors that make a big difference.

We examined 3,489 agents who changed offices in Arizona during the first 11 months of 2020 to get a sense of the influence on annual production on propensity to change offices. Figure 1 below shows the relative propensity to switch offices when compared to the total agent population. 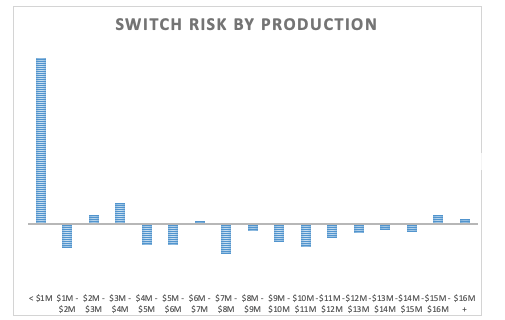 A bar above the line indicates a group of agents more likely to switch, a bar below indicates those less likely. This graph tells us that, aside from agents producing less than $1 million per year, production level has very little impact on propensity to change offices. Agents producing less than $1 million per year are the exception and change offices at rates much higher than average. We’ll see later that this may be related to the age and tenure of these newer agents.

Age Has a Huge Impact

We used a set of 1,100 agents who switched offices in 2019 and 2020 in Wisconsin—a state for which we have excellent birthdate data—to examine the effect of age on likelihood to switch. The Bureau of Labor Statistics has publish a study that shows the likelihood to change jobs declining exponentially with age. Will real estate agents follow this pattern? Figure 2 shows the result of our analysis. 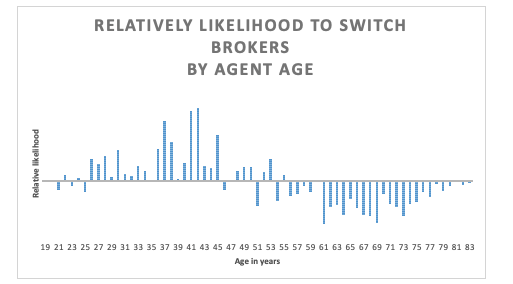 The bars above the line (indicating a group more likely than average to switch) rise for people in their 20s, peaking for those in their late 30s before declining back to average by around age 50. Clearly age is a huge factor in determining who is most at risk of switching offices with peak risk between 35 and 42 years of age. Those older than 50 are more likely to stay put.

Years in Real Estate Is the Biggest Determinant

An examination of initial license dates in our Arizona data set lets us plot risk of switching offices by years since original licensure.

The implications of Figure 3 are obvious: Newer agents are mobile. Agents in their first year in business are too overwhelmed to consider changing offices but the risk jumps dramatically for agents in their second and third year in real estate. Agents remain at a higher-than-average risk of moving until they reach their eighth year in business. After the eighth year, they become less likely than average to move for the rest of their careers.

Armed with this information, brokers are in a position to look at strategic management of their agent pools in a new way. A few takeaways:

Brokers should strategically plan and recruit for the type of agent pool they want, balancing the benefits and drawbacks that come with differences in production, age and experience. Striking the optimal balance between stability and growth will be key to achieving the brokerage’s long-term goals.

This is not 2008 all over again for the housing market

When you hear people say that the current housing market is like 2008 all over again, you may want to remind them of the huge differences between this market and that one. HW+ Premium Content.

How secure is your brokerage lead data?

How sure are you that your vendor isn’t leveraging on your brokerage lead data?