Thirty-five percent of people who bought a home last year said they made an offer without first seeing the home in person, up from 33 percent in May 2017 and 19 percent in June 2016. This is based on a Redfin-commissioned survey conducted in November and December 2017, which included responses from 1,503 people who purchased a home in the previous 12 months. This is the final issue of a three-part series reporting on the results of the survey. The first and second reports focused on politics and the housing market respectively. 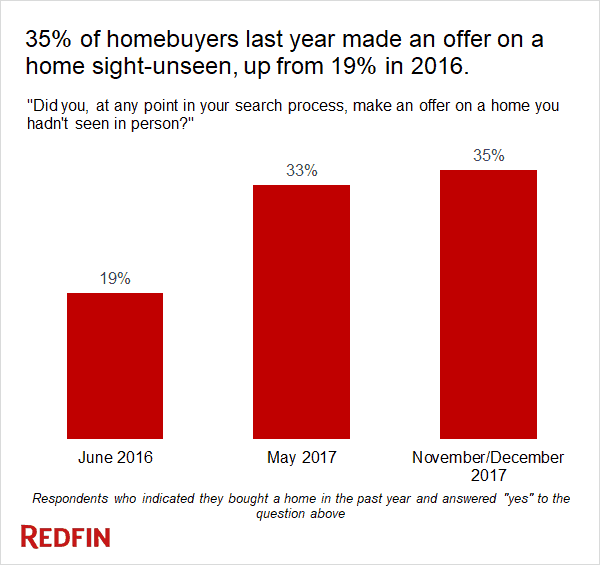 Millennial homebuyers were even more likely to make an offer sight-unseen, with 45 percent in November and 41 percent in May saying they had done so. These results likely reflect millennials’ comfort relying on information they find online about homes for sale, neighborhoods they might not have visited in person and the home-buying process in general. 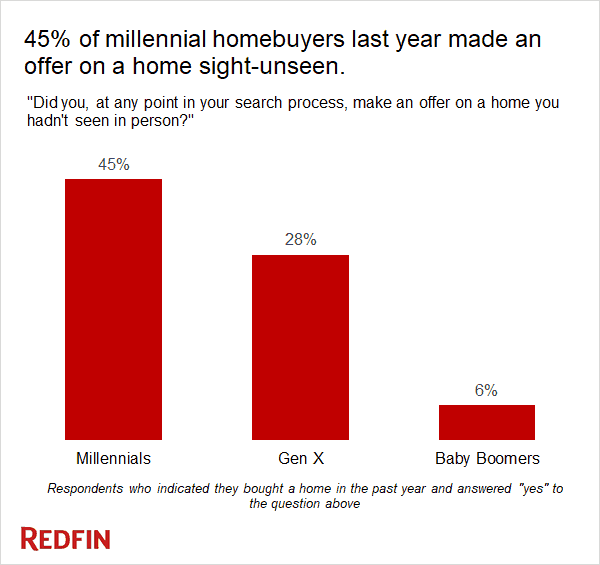 More than half (57%) of respondents who bought a home in Los Angeles last year made an offer sight-unseen. The prevalence of foreign investors in L.A. may have played a role in the popularity of sight-unseen offers there. The market-by-market breakdown below shows that the trend was also driven by buyers in other competitive California metros, with 46 percent in San Diego and 44 percent in San Francisco having done so.

People who can’t get in to tour a home right away because they’re busy or relocating from out of town often rely on tools like Redfin 3D Walkthrough and FaceTime® to explore the home itself, and the vast array of statistics, reviews, maps and articles online that can help a prospective buyer understand what it’s like to live in a neighborhood. However, in the case of offering sight-unseen, the agent can be a buyer’s greatest resource. From the fast pace of the market, to the time constraints of buyers relocating from out of town, Redfin agents cite numerous factors that influence buyers to bid on a home before seeing it in person.

Angela Hunter, a Redfin agent in Omaha, worked with a family relocating from Jacksonville, Florida to Offutt Air Force Base in Bellevue, Nebraska.

“This family had only a few weeks to find a home and they did not want to live on-base or rent,” Hunter said. “Because the wife was eight months pregnant at the time, they needed a move-in ready home within 20 minutes of the base. While conducting video tours with them, I was very careful to explain things that they would not be able to experience virtually, like the sounds, smells and textures. I pointed out flaws that are hard to detect through video so that nothing would be a surprise to them once they visited in person. It’s not the easiest way to shop for a home, but together we found the perfect match.”

With no end to the housing shortage in view and more millennials entering the housing market, the trend toward sight-unseen bids is likely to grow in 2018.

Redfin contracted SurveyGizmo to field a study between November 1st and December 6th, 2017 of 4,270 people from the general population who indicated they had bought or sold a home in the past year, tried to buy or sell a home in the past year or plan to do so this year. The survey targeted 14 major metro areas (Austin, Baltimore, Boston, Chicago, Dallas-Fort Worth, Denver, Los Angeles, Phoenix,Portland, Sacramento, San Diego, San Francisco, Seattle and Washington, D.C.). For the purpose of this section of the report, we did not count responses from Austin, Phoenix or Sacramento in order to provide an accurate comparison to past results.