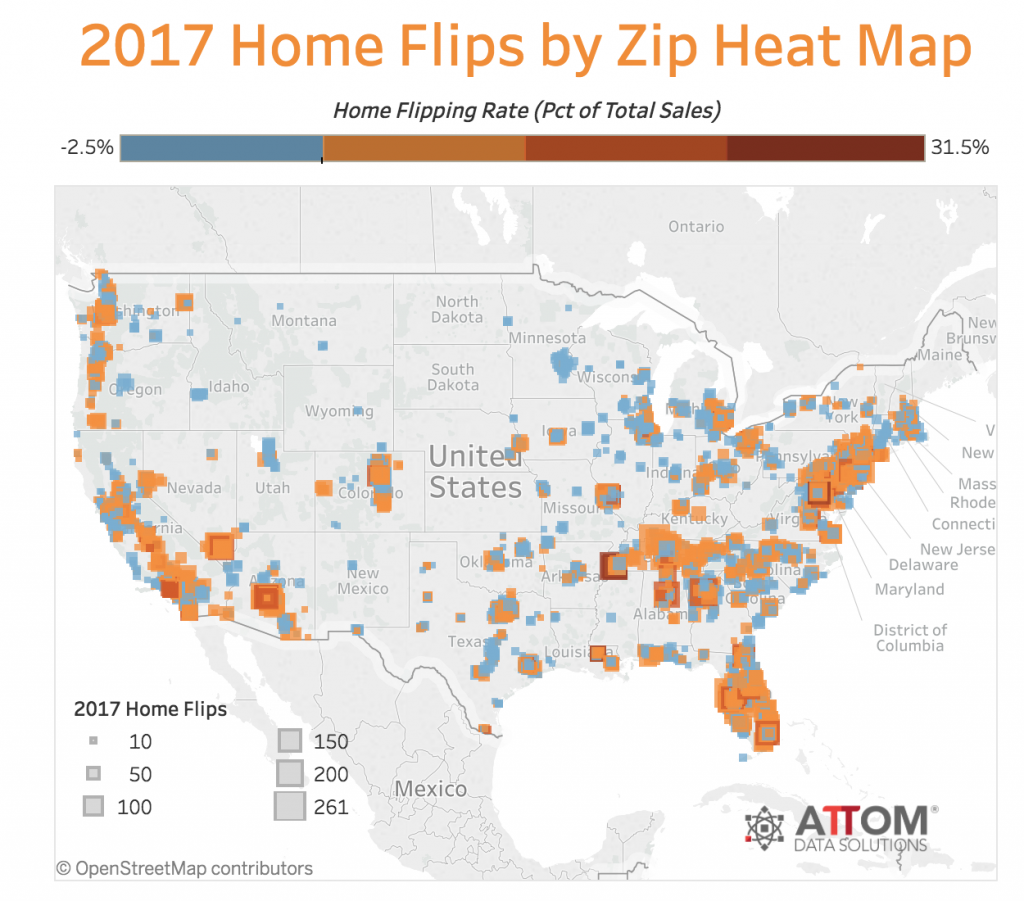 “The surge in home flipping in the last three years is built on a more fundamentally sound foundation than the flipping frenzy that we witnessed a little more than a decade ago,” said Daren Blomquist, senior vice president at ATTOM Data Solutions. “Flippers are behaving more rationally, as evidenced by average gross flipping returns of 50 percent over the last three years compared to average gross flipping returns of just 31 percent between 2004 and 2006 — the last time we saw more than 200,000 home flips in consecutive years. And while financing for flippers has become more readily available in recent years, 65 percent of flippers still used cash to buy homes flipped in 2017, nearly the reverse of 2004 to 2006, when 63 percent of flippers were leveraging financing to buy.”

“We aren’t surprised that the dollar volume and share of financed flips are hitting new highs,” said Matt Humphrey, co-founder and CEO of LendingHome, which saw a nearly 70 percent increase in its dollar volume of loans on home flips completed in 2017 compared to 2016, according to an ATTOM analysis of loan data. “Online lenders like us exist because banks and large lenders don’t play in this space, and they aren’t using technology to be efficient, nimble and fast. Now that investors have digital-native lenders catering to them, financing becomes an attractive alternative to cash. We predict this trend will continue because 2018 is already off to an incredible start for us.”

Flipped homes originally purchased by the investor with financing represented 34.8 percent of homes flipped in 2017, up from 31.6 percent in 2016 to the highest level since 2008 — a nine-year high.

“Institutional demand in this space has grown substantially over the last several years. Fix-and-flip has become an asset class of its own that is well-financed by banks and highly sought by institutional buyers,” said Maksim Stavinsky, co-founder and COO at Roc, a nationwide originator which saw close to double the dollar volume of loans on home flips completed in 2017 compared to 2016, according to an ATTOM analysis of loan data.

“Across Southern California, the flipping of investment properties continues to be a challenge, due to low available housing inventory, which is in turn driving up pricing and downsizing profitability for investors,” said Michael Mahon, president at First Team Real Estate, covering Southern California. “To best position cash available for investment, we are experiencing more investors looking to utilize loan financing as leverage, as opposed to all-cash purchases, in an effort to capture greater numbers of investment opportunities, as opposed to maximizing individual profitability on investment projects.” 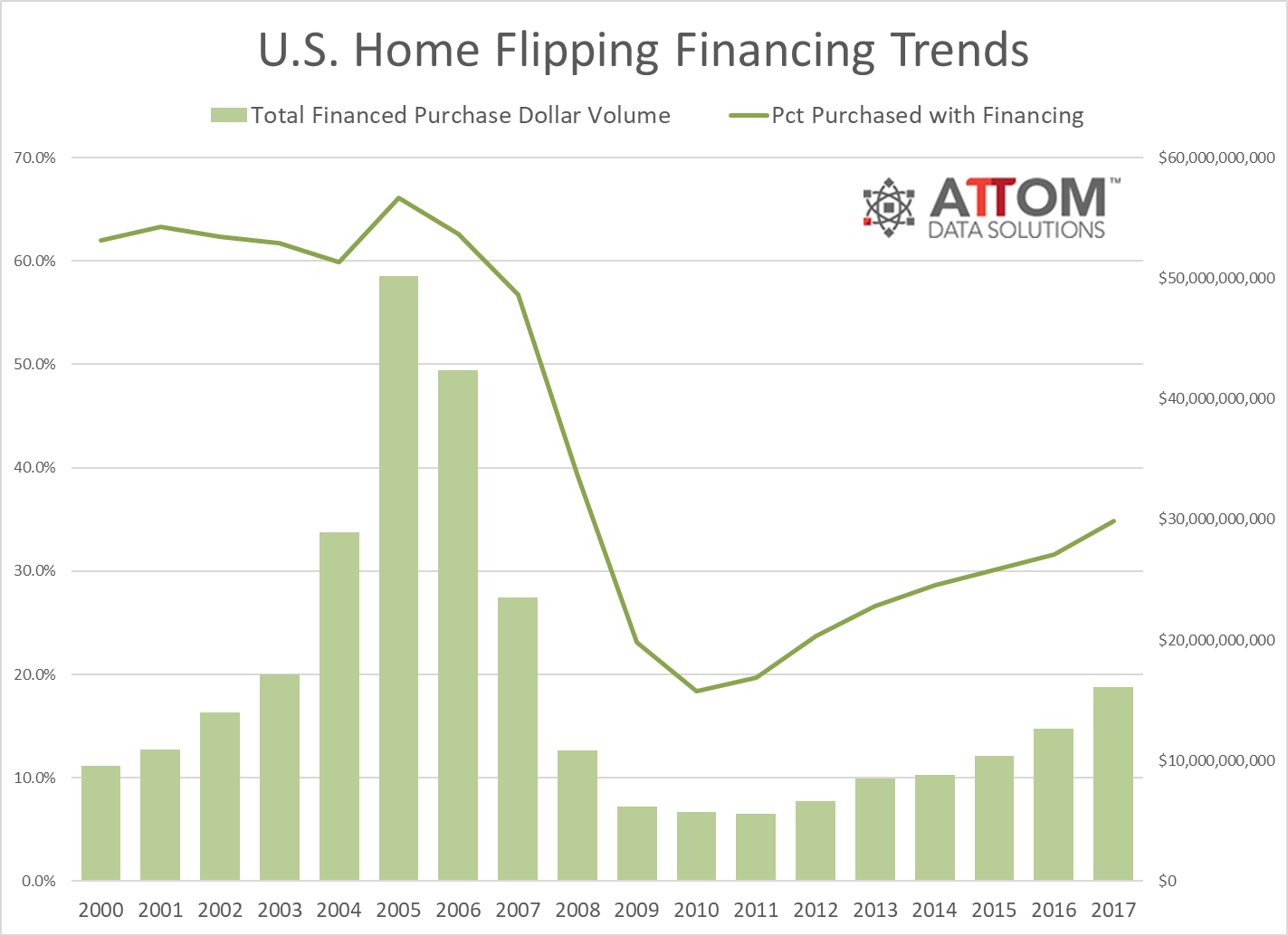 “We are seeing an entirely new category of sellers on Roofstock made up of investors choosing to buy/fix/lease/sell with a tenant in place versus buy/fix/flip vacant via the MLS,” said Gary Beasley, CEO and co-founder at Roofstock, an online marketplace for investment properties. “This allows home flippers to reduce their selling costs, earn income during their hold period rather than having carrying costs, and potentially turn their capital faster. The availability of data on where single-family rentals are trading on a cap rate basis allows value-add investors to back into the prices they can pay based upon their targeted profit margins and estimates of renovation costs and market rents, allowing them to take advantage of robust investor demand for cash-flowing properties.”

Completed home flips in 2017 yielded an average gross profit of $68,143 (difference between median purchase price and median flipped sale price), up 5 percent from an average gross flipping profit of $64,900 in 2016 to a new all-time high for as far back as data is available (2000).

“I think it is starting to feel a little like 2007 again, only with one major difference: the people buying investment properties are not ‘sub-primers’, but investors with more sophisticated deal sourcing methods,” said Brad McDaniel, co-founder and CEO with Likely.AI, a company that applies artificial intelligence and machine learning to predict future events in real estate and mortgage origination. “One of our clients, in the wholesale business, made a strategic move to become more data-driven in all aspects of their business. I believe this trend, the adoption of big data, and AI by residential real estate investors, is in its infancy. It’s been said that real estate is a laggard when it comes to technology adoption; that is changing because of AI.”

Along with Pittsburgh and Philadelphia, other major metro areas with at least 1 million people and gross flipping ROI of at least 80 percent were Cleveland (113.3 percent); Baltimore (97.7 percent); New Orleans (92.9 percent); Cincinnati (85.0 percent); and Buffalo (82.2 percent). 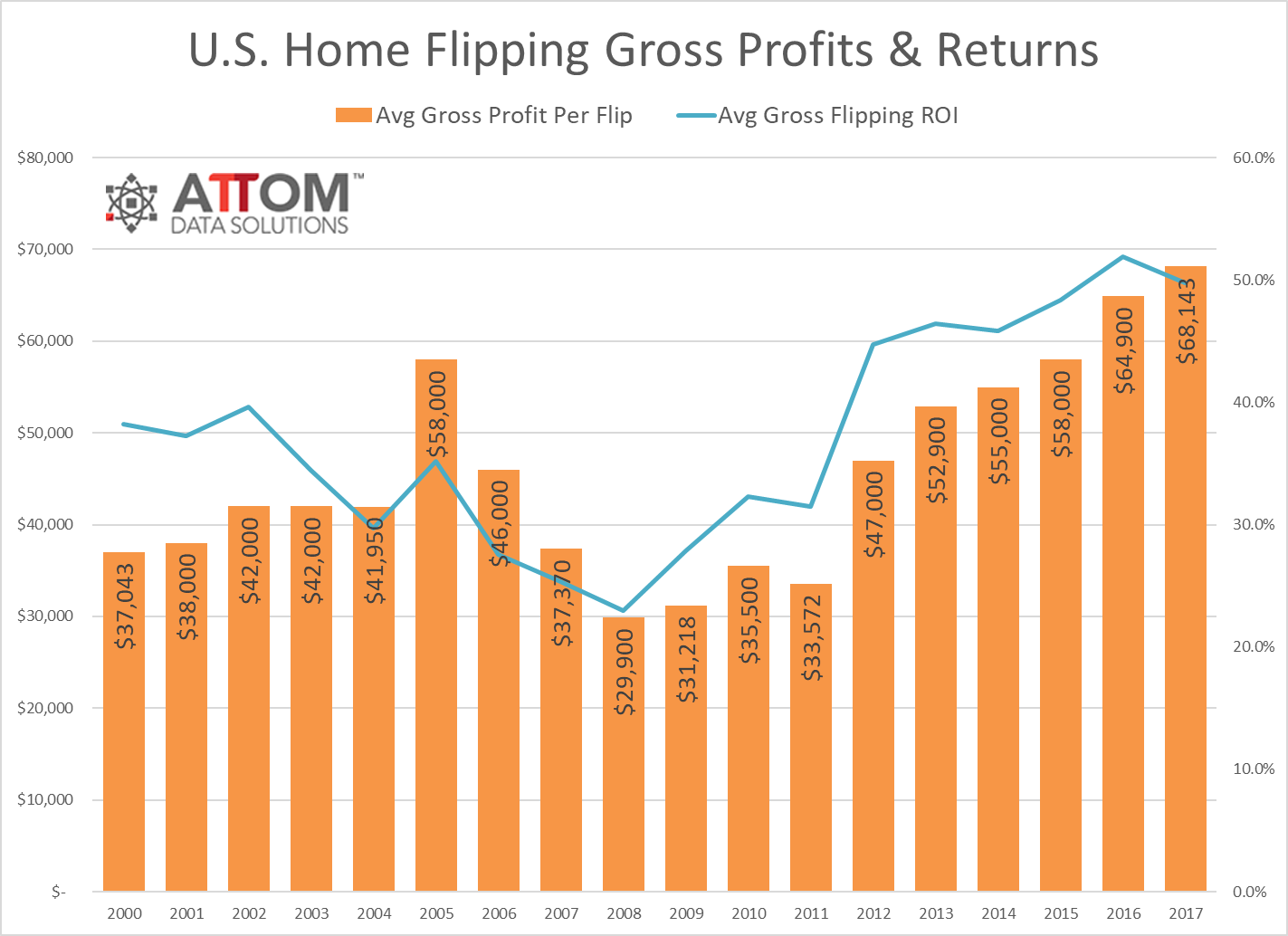 “I believe the drop in Seattle home flipping can be attributed to the large number of buyers that home flippers are competing against in the market,” said Matthew Gardner, chief economist with Windermere Real Estate in Seattle. “As a result, they’re being forced to pay more which cuts deeply into potential profits — also down from last year. I anticipate that supply limitations, in concert with rising home prices, will continue to put downward pressure on the number of flips in the Seattle market in 2018.” 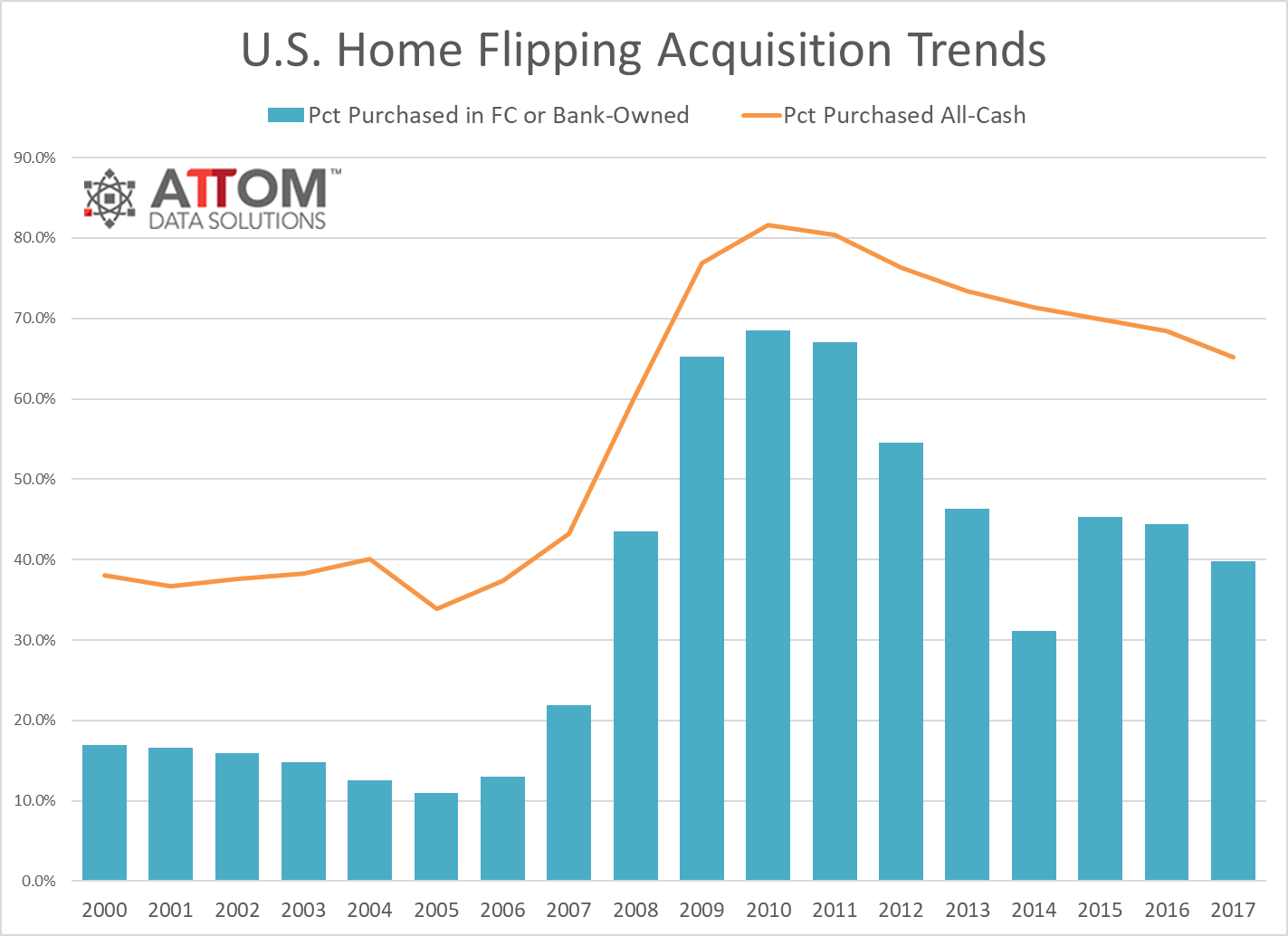 Average time to flip unchanged from 2016 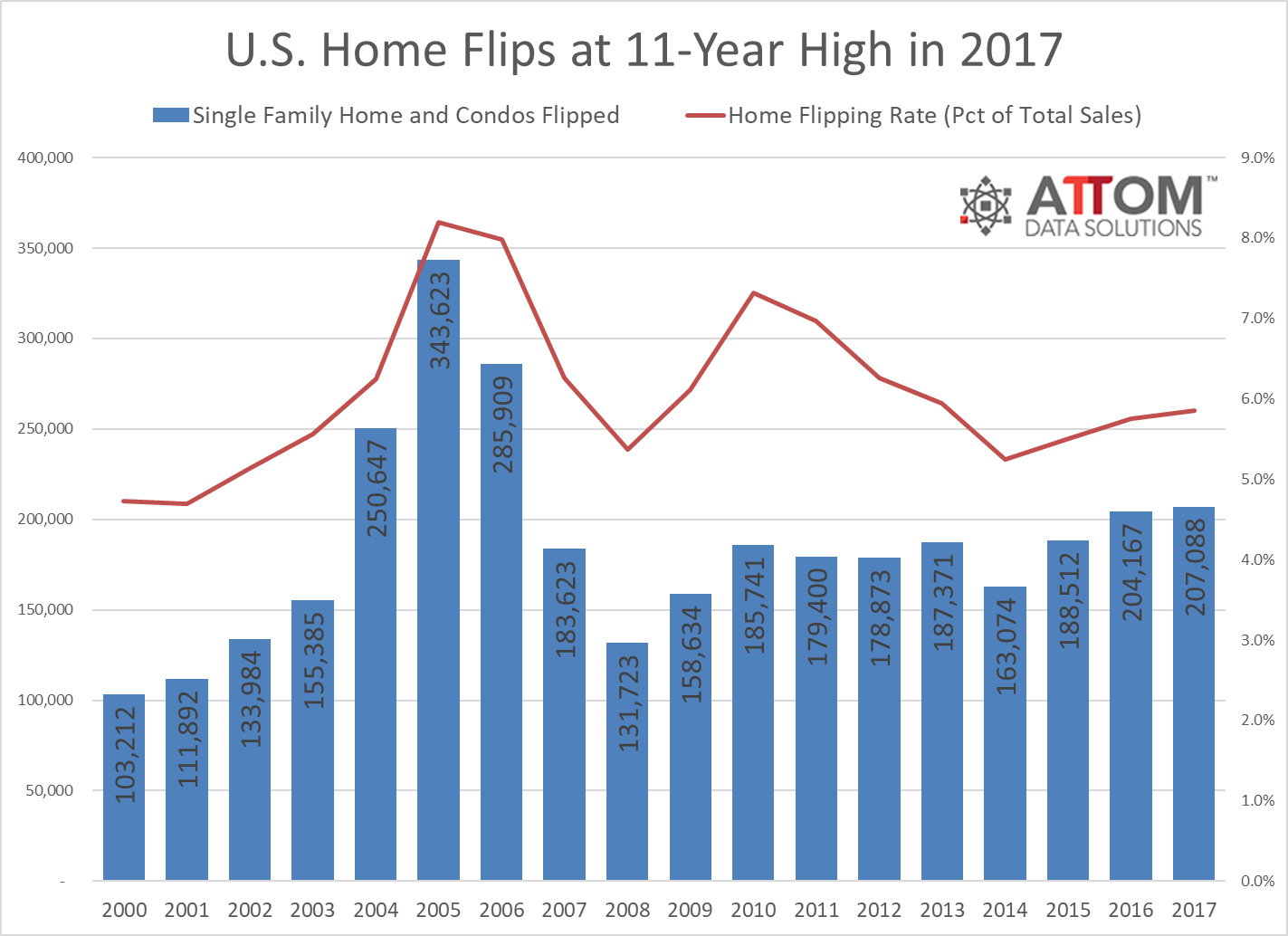 Report methodology
ATTOM Data Solutions analyzed sales deed data for this report. A single family home or condo flip was any transaction that occurred in the year where a previous sale on the same property had occurred within the last 12 months. The average gross flipping profit is the difference between the purchase price and the flipped price (not including rehab costs and other expenses incurred, which flipping veterans estimate typically run between 20 percent and 33 percent of the property’s after repair value). Gross flipping return on investment was calculated by dividing the gross flipping profit by the first sale (purchase) price.