What Men and Women Homebuyers Can Agree On

Seventy-three percent of homebuyers are looking for a house to live in with their spouse or partner. For single homebuyers, the task doesn’t require compromise, and men tend to have more money to work with.

Most real estate professionals know that when homebuying is a collaborative effort between two people, some give and take is expected. Zillow’s Consumer Housing Trends Report in 2018 found that 86% of all buyers who purchased a home in the last year live with someone else, with 73% living with a spouse or partner. According to Zillow’s research, it takes over four months for the typical buyer to find a home.

It’s no wonder: When it comes to finding the perfect home, men and women want slightly different things.

This is according to a poll by Zolo Realty, online real estate marketplace based in Canada. More women chose a garage (51%) to top their “must-have” list. Less than half of men (41%) had a garage as a necessary feature. However, more men (38%) chose a main-floor bathroom as a “must-have” compared to women (30%).

And 64% of men preferred the idea of a new-build home rather than a resale home, while women were nearly evenly split with 51% opting for a resale versus 49% choosing a new build.

Another big difference was how many women ranked an updated kitchen as a must-have — with 39% of women putting this as a top desire — compared to men at 29%.

One thing men and women can agree on is the preferred number of bathrooms — 59% of women and 54% of men believe that two bathrooms in a home are sufficient.

The two sexes also appeared to be aligned when it came to the amount of home renovation work they were willing to take on. When asked “How much repair or renovation are you willing to do,” 58% of men and 59% of women reported “a little. I don’t mind painting and small updates.”

“According to the US Census Bureau, women earn 80.5 cents for every dollar a man earns, which in turn gives them less purchasing power when it comes to buying a home,” said Jennifer von Pohlmann, director of PR for ATTOM Data Solutions. “Therefore, it’s not surprising to see almost a $30,000 home value gap between single men and single women homeowners; however, we do see that in some of those higher valued markets, single women are owning more homes than single men, so hopefully it’s just a matter of time before the gender of the housing market values balance out.”

Infographic: Single and Looking to Buy a Home? 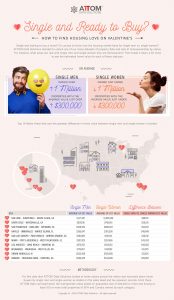 Single and Ready to Buy?