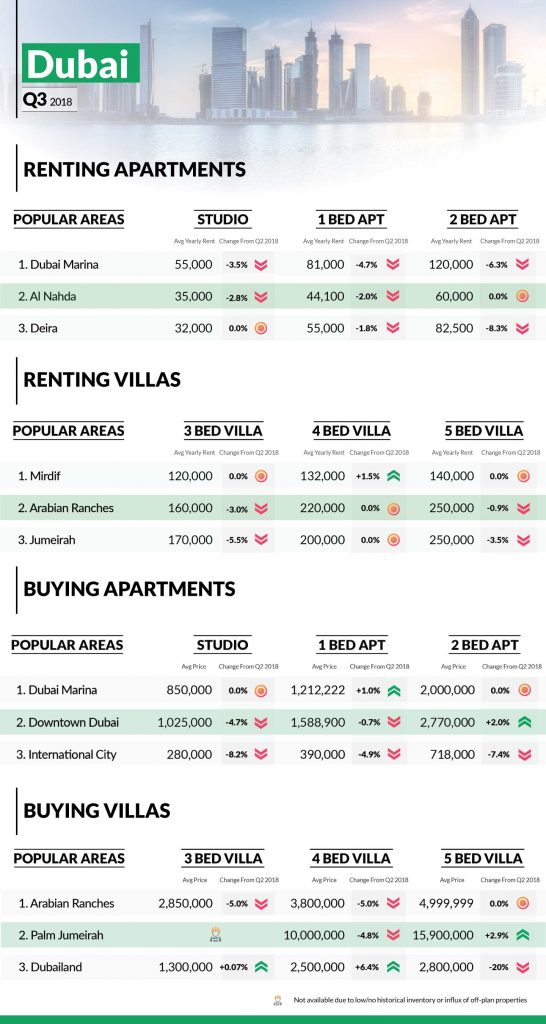 Prices slide on average across the market keeping buyers and renters in the driver’s seat in the Dubai property market – Bayut.com Q3 2018 report.

The average cost for buying and selling property in Dubai has decreased from the last quarter of 2018 in most areas, but the price differences have been fairly modest in Q3 as per the real estate market report by Bayut.com.

• The price for renting apartments in Dubai decreased slightly on average. The most noticeable decreases were for 2-bedroom units in Deira and International City where prices fell by a substantial 8.3%. Other popular areas such as Al Nahda, Dubai Sports City and Jumeirah Lakes Towers remained more or less stable when it came to rents in Q3.

Dubai Marina, stays the most popular area for apartment rentals in Dubai. The average cost for renting a studio in Dubai Marina is AED 55k, 1-beds are at AED 81k and 2-beds at 120k. This quarter, the rents have not fallen drastically in any of the top 10 locations for leasing flats in Dubai compared to what we saw last quarter. After Deira and International City the next steepest decline was for 1-bed apartments in JVC, down by 6.7% and studios in Dubai Sports City which went down by 5.1%. Most other decreases were less than 5%.

Rents dropped overall for villas in Dubai, with the exception of the most popular location, Mirdif where rents remained largely unchanged. The 5-bedroom units in Dubailand saw a marginal increase of 2.6% and 4-bedroom villas in Jumeirah Park witnessed an increase in average rents from the AED 195k seen in Q2 of 2018 to AED 210k now. The steepest fall in rents was seen for 5-bedroom villas in Al Barsha, where rents went down from AED 240k in Q2 to AED 220k in Q3.

Arabian Ranches was the most popular area for villa sales, and the average price for a 3-bed villa fell by nearly 5% to AED 2.85M. The only noticeable price change was for 4-bedroom villas in Dubailand, where the average sales price went up from AED 2.35M in Q2 to AED 2.5M in Q3. All other increases and decreases were within 5%. The price changes in Dubailand can be attributed to the delivery of a lot of newly finished off-plan projects including some premium developments.

When it comes to off-plan investments in Dubai, the most popular locations are Mohammed Bin Rashid City, Akoya Oxygen, JVC, Downtown Dubai and JLT.

Within MBR City, the District 7 project was the most searched for at 35.8% and in Akoya Oxygen the top spot went to Sahara Villas which accounted for 30.7% of the searches.

Forecast For The Next Quarter

Haider Ali Khan, CEO of Bayut, said: “The average fall in property prices for this quarter is in line with the trends we saw in the H1 Market Report. It’s definitely still a buyers and renters market, but modest decreases in price suggest potential bottoming-out across the emirate. With the recent announcement of the new retirement visa along with earlier plans for the 10-year residency visa and 100% foreign company ownership coming into effect by the end of the year, we could see sales picking up in 2019. The time is perfect for people to invest and become homeowners or upgrade to bigger rental properties in Dubai and benefit from decreased prices floating in the market at the moment.”

With a lull in the market, it’s time to boost your productivity. Take the time to do these 10 activities to set up your success.