Housing Inventory Rises 5% in November From Year Before

Meanwhile, sales decline 8%, according to Redfin.

“The tide has turned,” said Redfin Chief Economist Daryl Fairweather. “Sellers are now competing for buyers, but they haven’t all realized it yet. Sellers who have adjusted their price expectations downward are still finding plenty of willing buyers. Sellers holding out for high prices are contributing to declining home sales and growing inventories. We see few signs that buyers are likely to reward their patience.” 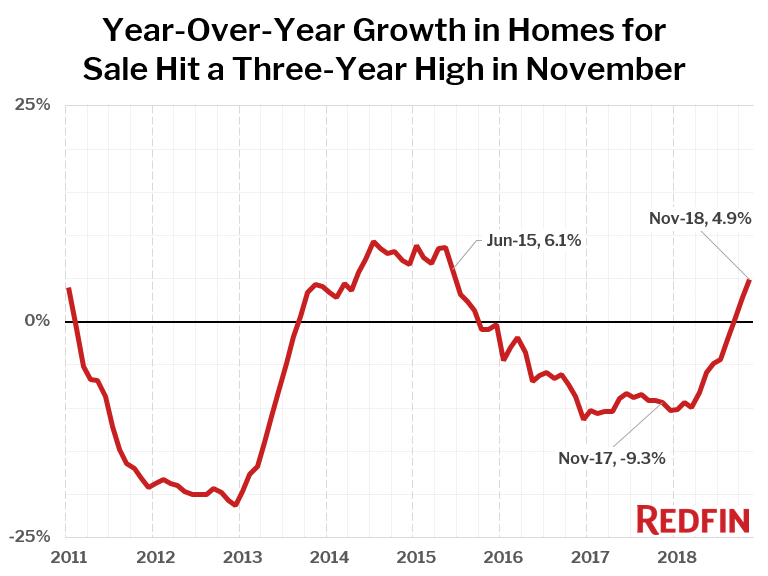 The number of completed home sales fell faster than it has in over two years, down 8.3 percent from November 2017. Home sales declined in 65 of the 74 largest metro areas that Redfin tracks.

Rising mortgage rates–4.9% in November, a full point above the 2012-2017 average–may be putting a damper on sales.

As home sales continue to decline, the number of homes on the market is on the rise, shifting the balance of supply and demand back toward buyers’ favor. The number of homes for sale in November was up 4.9 percent from a year earlier. This was the highest level of inventory growth since June 2015, and the eighth straight month that the year-over-year figure increased. However, the national figure masks a wide variation among individual metro areas, with inventory skyrocketing in places like San Jose (+123.2%), Seattle (+96.5%) and Oakland (+60.3%) but still falling fast in other areas such as Philadelphia (-24.0%), Camden (-19.8%) and New Orleans(-19.1%). The number of homes newly listed in November rose 0.3 percent year over year.

Across Redfin metros, the typical home that sold in November went under contract in a median of 44 days, two days faster than last year. Earlier this year the fastest markets saw homes go under contract in less than 10 days, but spring’s fastest markets are slowing down the most this fall. This November, 19 percent of homes sold above the list price, down from 22.2 percent last November. Meanwhile the share of homes with a price drop declined slightly from an all-time high of 31.2 percent in October to 24.6 percent in November. Nationwide, the number of homes newly listed in November rose 0.3 percent year over year.

Click here for the full report, complete with graphs, charts and market-level data.