With Britain in turmoil, questions abound about the effects of a ‘hard’ Brexit. Realtor.com forecasted the impact on U.S. homebuyers and sellers in 2019.

The network forecasts modest inventory increases and softening sales for 2019. Now it’s suggesting those of us stateside might want to brace for the impact of Brexit, especially the worst-case scenario of an exit with no agreement. Forecasters say such a scenario will not cause recession in the U.S., but that additional shocks could produce a recession in 2020.

A mild slowdown in the housing market has already begun. Realtor.com’s 2019 housing prediction is that home sales will drop 2 percent. Some Brexit scenarios will negatively affect 2019 home sales even further, but will have little impact on prices.

So, what are the shocks that we should worry about? Unemployment remains at 4.0 and the gross domestic product has been strong. While Realtor.com says there is no one particular shock we should worry about, but warns that a series of shocks can accumulate, “sending the economy into a tailspin.” The possibility of Britain leaving the European Union (EU) without an agreement on future trade, economic, travel and immigration policies is one of those shocks.

While negotiations continue, numerous policy outcomes could result from these discussion before the March 29 exit date.

While the greatest impact of Brexit will be faced by those on the other side of the pond, given the size of the British and European economies, the impact will also be felt globally, says Realtor.com. Its measures focus on the potential impact to the U.S. economy and housing market.

Says Realtor.com: If Britain reverses and decides to stay within Europe, the impact on British and European trade and GDP will be better than what is currently expected. This will also impact the U.S. economy positively, temporarily boosting GDP above what it would have been as shown by the bright red line. At the other extreme, if Britain leaves with no agreement in place, hard borders will suddenly be erected, supply chains will be disrupted and economic growth will fall precipitously in Britain, Ireland, Europe and to a lesser extent the rest of the world.

The impact of No Deal on U.S. GDP is shown by the pink line. GDP in all scenarios will level off in 2020 because of the business cycle. However, under the most severe scenarios, GDP will level off at a lower level. Note that GDP under all of the scenarios will continue to grow, but only slightly. Any additional shock from other risk factors could push GDP into negative territory and possibly a mild recession. 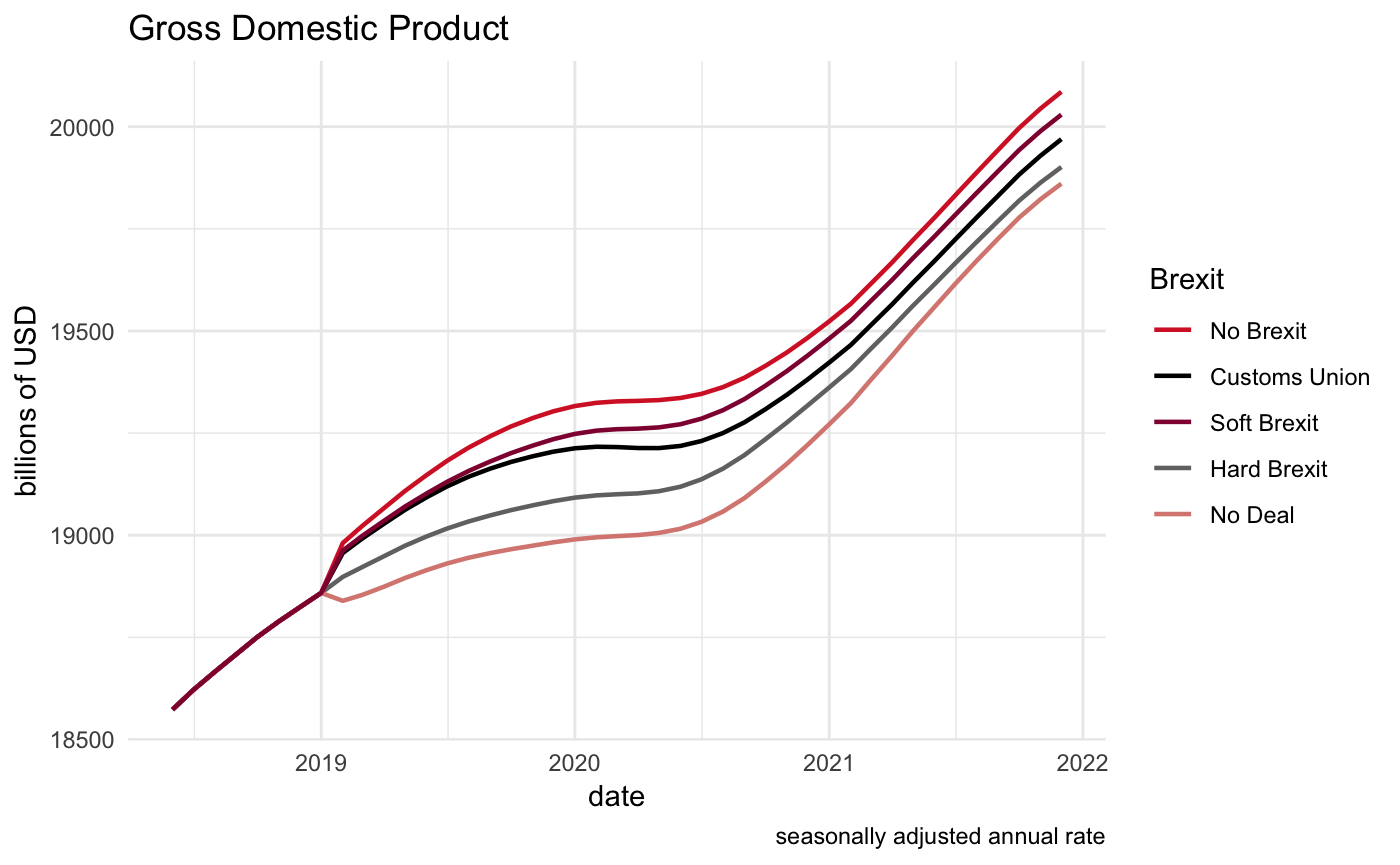