For about the past 32 years, the real estate industry rumor mill has been waiting for NAR membership to decrease to 300,000.  I’m not sure why that number has stuck. I assume someone calculated that if membership went down to that amount, all 300,000 real estate professionals would make a great living.  Of course, that has not happened.  Then, there was NAR’s Board of Choice policy adopted in May 1994, which many believed would decrease the number of associations. With Board of Choice in 2014, again, many thought this would end all associations under 100 members. The numbers have not shown any of this to be true.

From 2013 to August 2018, local associations under 100 members decreased by 41 percent. What has resulted is that the 10,000 and up membership locals increased their members from 17 percent of the membership in 2013 to 27.4 percent today. It’s the largest local category gain.  That, of course, resulted in two category groups that combined had a 56 percent decrease in members.  Overall, the locals had a membership total increase of 29.3 percent.

Many would like to restrict membership. To do that, any policies will have to be vetted to assure there are no antitrust violations.  I was told in 1976 when I came into the business as a CEO for a local association that all the antitrust lawsuits that hit the real estate associations in the 1960s began when one association would not allow a part-time sales agent to join the association. 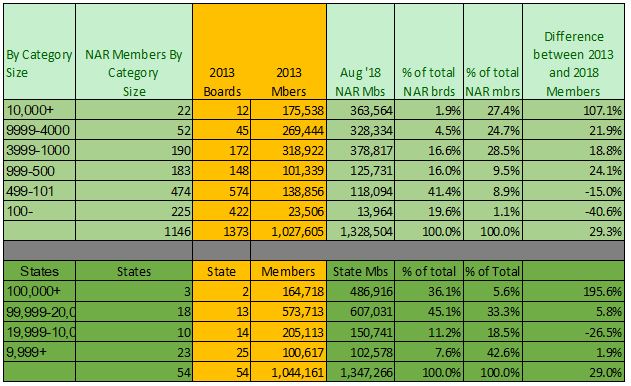 From 2013 until last year, some 53 percent of the local CEOs had been replaced.  The last time there was a massive change in CEOs of local real estate associations was in the 1970s.  Embattled CEOs who were still licking their wounds from the long FTC investigations were happy to hand over the reins and warning us kids of the terrible decision we made to get into this game.

Half of all Association CEOs Have Been Replaced

Although antitrust laws were written in the early 1900s and many states added their own antitrust laws at later dates, most real estate associations had (in print!) the commission rates members had to charge.  The investigations also reviewed what they called unreasonable membership criteria, erroneous NAR Back MLS Rules, and Regulations.  From these investigations and court cases came massive mandatory changes NAR had to adopt. In turn, all local and state associations also had to make the changes.

New Kids on the Block

The new kids on the block were left with throwing out all bylaws, rules, and regulations, etc. and had to write them close to the way the Feds demanded.  Then, it was our duty to keep the associations and the brokers out of court which resulted in a list of rules that basically started out with “you can’t do …….”.  In fact, George Patt, a very popular past-CEO, conducted the MLS training at the NAR “EO seminar” (that is what we were called back then, Executive Officer) each year. He would enter the room as Moses holding two tablets of fake stone with the 14 points instead of the 10 commandments.  Many of us changed from reciting the Lord’s Prayer and replaced it with “We do not fix, control, recommend, suggest or maintain commission rates, splits and fees.”

It is interesting to see all the all the rules that were thrust upon us all those years ago are now being replaced.  I’m not sure what it truly means since the laws have not changed but apparently, our attitudes have.  The industry must feel they can beat the odds.

Of course, nothing can stay the same.  In 1908, the dues for North Shore association in Illinois were $50. The 1908 bookkeepers book indicated the third-largest cost paid for by dues was for association lunch meetings, the second-highest cost was alcohol at the lunches and the No. 1 cost was cigars.  In  1908, NAR membership was 20 local associations with 1,646 members.  We’ve come a long way baby, or is it just a circle?