On July 9, President Trump named Brett Kavanaugh, a federal judge on the D.C. Circuit Court of Appeals, as his nominee to replace Justice Anthony Kennedy on the U.S. Supreme Court. 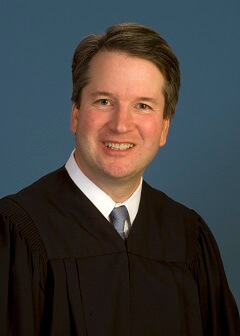 Judge Brett Kavanaugh received his B.A. from Yale in 1987 and his J.D. in 1990 from Yale Law School.  He served as a law clerk for judges serving on the Third and Ninth Circuit Courts of Appeals and then served as a law clerk for Justice Kennedy on the Supreme Court.  Subsequently, he worked for the U.S. Solicitor General, Independent Counsel Kenneth Starr, the Washington, D.C.-based law firm of Kirkland and Ellis, and the George W. Bush White House.  He was nominated to the D.C. Circuit by President Bush in 2006.

But in the real estate finance community, he is best known as the author of the 2016 three-judge panel decision in PHH Corp. v. Consumer Financial Protection Bureau (CFPB), which declared the CFPB’s single-director leadership structure to be unconstitutional and rejected former CFPB Director Richard Cordray’s creative and controversial interpretation of RESPA.

Kavanaugh’s constitutionality ruling was overturned by the full D.C. Circuit Court of Appeals in January 2018, but his RESPA ruling was reaffirmed by a 7-3 majority of the court.  In his strongly-worded opinion that labeled the basic statutory question as “not a close call”, he debunked Cordray’s view that there is no RESPA exemption under Section 8(c)(2) for payments made for the fair market value of goods and services, and that payments made in anticipation of business referrals are suspect under RESPA.  Section 8(c) creates a clear safe harbor for fair market value payments, Kavanaugh said.

Notably, Brett Kavanaugh stated in his opinion that:

“[Tying arrangements can be beneficial to consumers and the economy by enhancing efficiencies and lowering costs…[RESPA] allows vertical integration of lenders and other settlement service providers under its affiliated business provisions. If such vertical integration is allowed, it would not make much sense to conclude that similar vertical contractual relationships are prescribed.”

Brett Kavanaugh also chided the CFPB for violating PHH’s due process rights by ignoring HUD’s past RESPA interpretations (on which PHH relied) and retroactively applying its new interpretation:

“The absurdity of the CFPB’s position is illustrated by its response to a hypothetical question about the CFPB’s bringing an administrative enforcement action 100 years after the allegedly unlawful conduct. Presented with that question, the CFPB referenced its prosecutorial discretion. But “trust us” is ordinarily not good enough.”

Kavanaugh’s confirmation process promises to be contentious, despite the fact that he was confirmed by the Senate as a D.C. Circuit judge in a 57-36 vote.  But his nomination should be good news for many in the real estate industry.

Sue Johnson is a strategic alliance consultant and is the former executive director of RESPRO (Real Estate Services Providers Council.)