According to the Former Fed Chair Ben Bernanke, the next recession is less than two years away, as stated in a recent article on HousingWire. Some of the reasons, according to the article were the personal and corporate tax cuts as well as a survey done by Zillow on home price expectations. 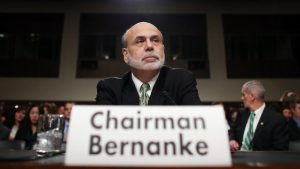 So, we have former Federal Reserve Chairman Bernanke saying the next recession will arrive in 2020 due to the overstimulation of the economy brought on by the Trump tax plan and continued deficit spending. This is the same guy who said there were no problems with the housing market in 2007.  He is also the same guy who didn’t mind pumping trillions of dollars in the economy even though it resulted in the most sluggish economic recovery in the past 50 years.  I know he is smart, of course he is, but it doesn’t mean he is right.

Many are wondering where the next recession will come from. Housing is due for a slowdown (already underway in many markets) due to extreme affordability and inventory issues.  The same can be said for the economy in general with record low unemployment rates.  There is no slack in the economy.  Could be that the trade wars, which appear to be breaking out, may cause a significant drop in economic activity. Or, higher interest rates will slow the economy somewhat.

I know he is smart… but it doesn’t mean he is right.

There will be a recession in the future and it could happen in 2020— or earlier or later.  When an economy is running as hot as in the United States, there is no way to go but slower.  The real question is how much slower and for how long?