Returns from house flips are at a four-year low, but financed flips were at an 11-year high, says new report. Top major market flipping rates were in Memphis, Phoenix, Las Vegas, Tampa and Birmingham.

House flipping is continuing to decline in the United States, with some notable exceptions, according to ATTOM Data Solutions, property database curator. In its Q4 and Year-End 2018 U.S. Home Flipping Report, ATTOM reports that 207,957 U.S. single family homes and condos were flipped in 2018, down 4 percent from the 216,537 home flips in 2017.

“With mortgage rates remaining strong and people staying in their homes longer, we have started to see a bit of a flipping rate slowdown,” said Todd Teta, chief product officer at ATTOM Data Solutions. “However, this isn’t to say home flipping is going away. The market is still ripe with investors flipping and bargains still await, especially in the lowest-priced areas of the country, where levels of financial distress remain highest.” 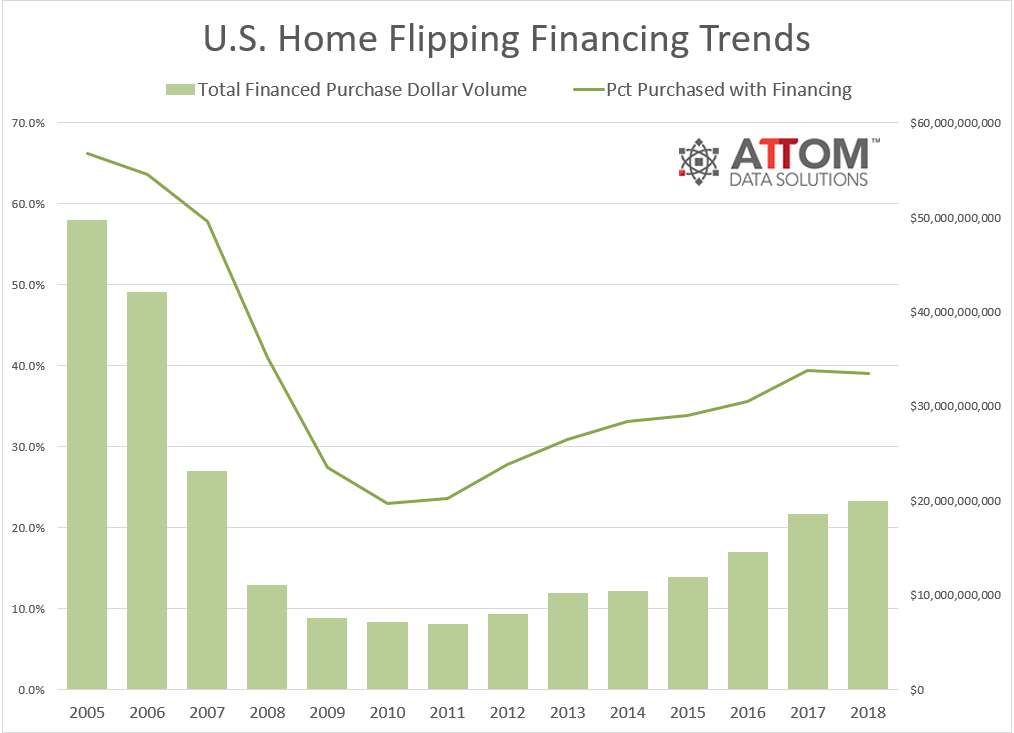 Among 53 metropolitan statistical areas analyzed in the report with at least 1 million people, those with the highest percentage of 2018 completed flips purchased with financing were Denver (53.7 percent); Providence, R.I. (51.8 percent); Seattle (51.8 percent); San Diego (51.6 percent); and San Francisco (50.8 percent).

Among the 53 metro areas analyzed in the report with at least 1 million people, those with the highest share of completed flips sold to all-cash buyers — often other real estate investors — in 2018 were Detroit, Michigan (48.8 percent); Birmingham, Alabama (42.4 percent); Jacksonville, Florida (39.8 percent); Miami, Florida (38.3 percent); and Buffalo, New York (38.0 percent). 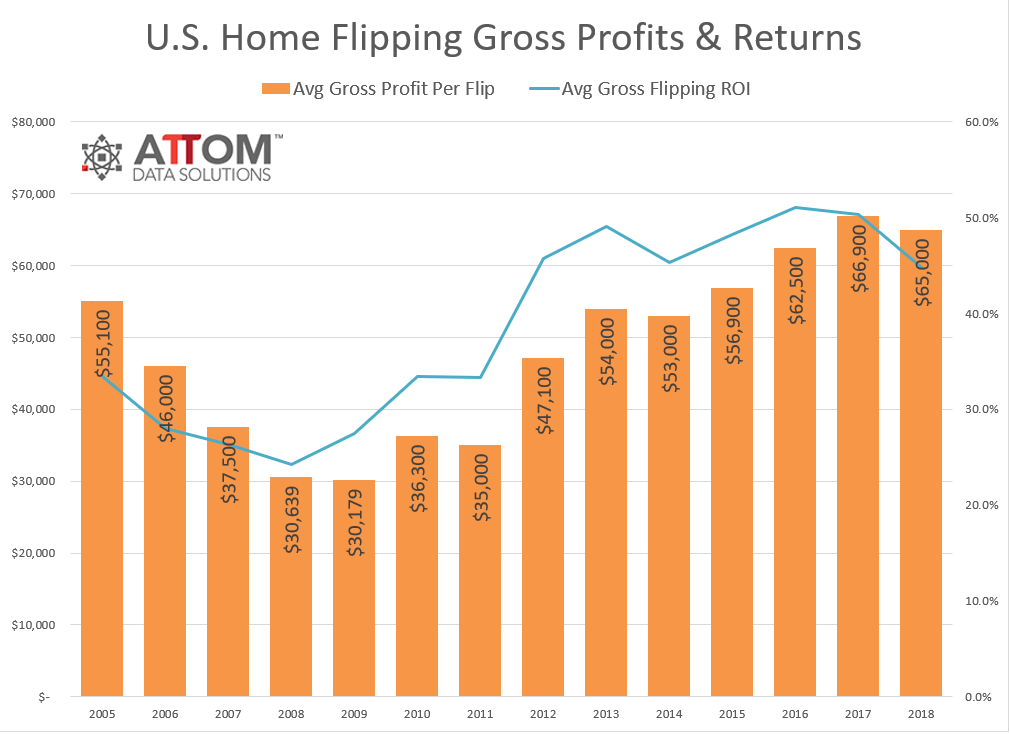 Along with Pittsburgh and Cleveland, other major metro areas with at least 1 million people and gross flipping ROI of at least 80 percent were Philadelphia (109.0 percent); Baltimore (103.5 percent); Buffalo (96.2 percent); Memphis (86.5 percent); and Cincinnati (84.2 percent).

Among 6,015 zip codes with at least 10 home flips completed in 2018 and a population greater than 5,000, the highest home flipping rate was in 38141 in Memphis where home flips represented 29.5 percent of all home sales for the year. Other zip codes in the top 20 for highest 2018 home flipping rate included zip codes in Donna, Texas; Miami, Florida; Washington, D.C.; Jamaica, New York; Baton Rouge, Louisiana; Compton, California; and Phoenix, Arizona.

Among metro areas with at least 1 million people, those with the biggest annual increase in home flipping rate in 2018 were Boston, Massachusetts (up 33.3 percent); Tucson, Arizona (up 27.3 percent); Raleigh, North Carolina (up 24.5 percent); Columbus, Ohio (up 13.1 percent); and Hartford, Connecticut (up 12.8 percent). 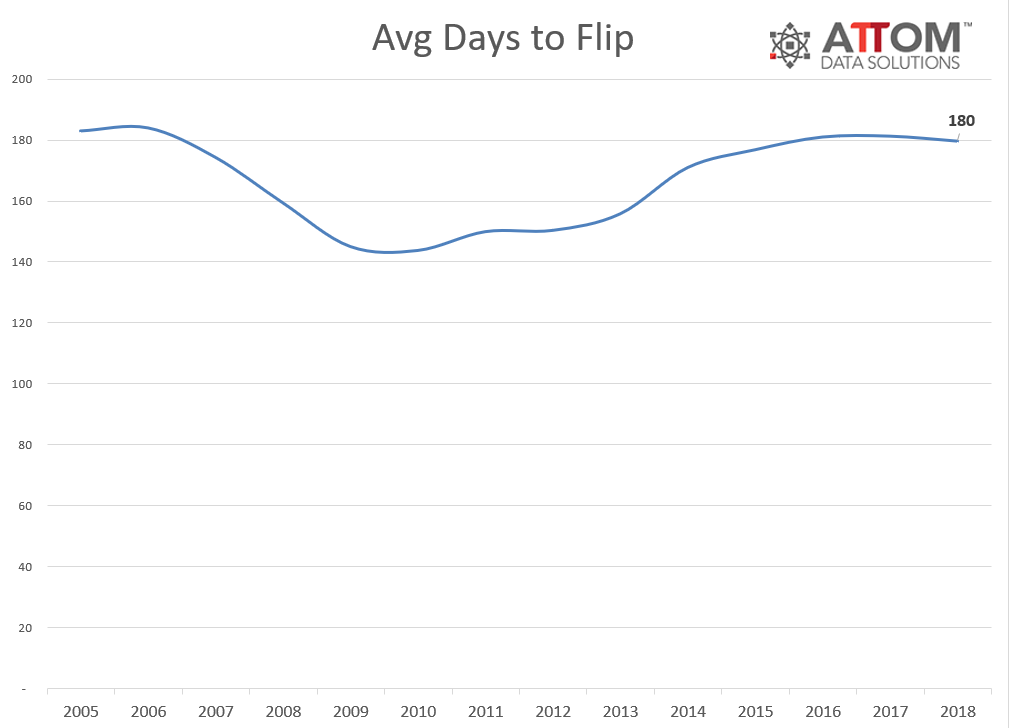 Average time to flip down slightly from 2017

ATTOM Data Solutions analyzed sales deed data for this report. A single-family home or condo flip was any transaction that occurred in the year where a previous sale on the same property had occurred within the last 12 months. The average gross flipping profit is the difference between the purchase price and the flipped price (not including rehab costs and other expenses incurred, which flipping veterans estimate typically run between 20 percent and 33 percent of the property’s after repair value). Gross flipping return on investment was calculated by dividing the gross flipping profit by the first sale (purchase) price.