“All but one of the top 20 markets with the heaviest buyer traffic recorded double-digit showings per listing in September, well above the current U.S. average of six showings per listing,” said Michael Lane, President of ShowingTime. “That number more than doubled in several markets from the same time last year, despite the pandemic.”

Meanwhile, some communities along the beleaguered Gulf Coast – hit hard by Hurricane Laura at the end of August and Hurricane Delta in early October – experienced year-over-year declines in showings. Nevertheless, Louisiana is tracking ahead of 2019 figures for showing activity in what has proven to be a resilient real estate market. 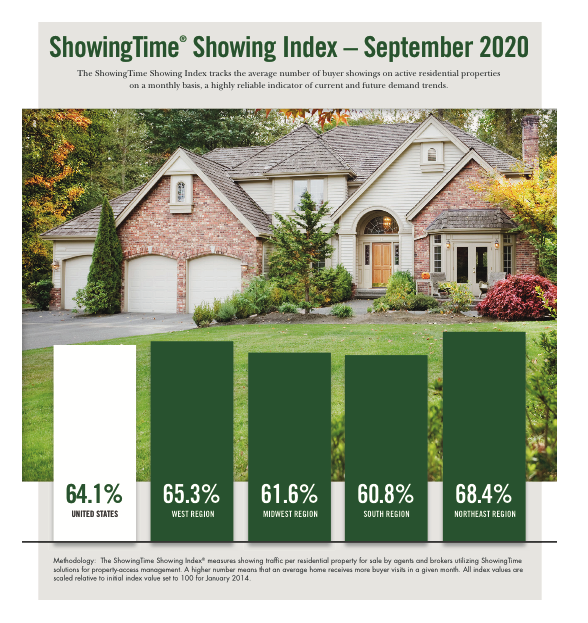 “In September, we saw a normal seasonal slowdown of about 8 percent from August,” said ShowingTime Chief Analytics Officer Daniil Cherkasskiy. “Due to much lower levels of available inventory, however, showing activity is still significantly above last year’s values, a situation that is likely to persist through next May.”

The Northeast Region saw a year-over-year increase in buyer traffic of 68.4 percent in September, marking the fourth consecutive month the region recorded the largest jump in showing activity. The West’s 65.3 percent uptick followed, with the Midwest’s 61.6 percent rise and the South’s climb of 60.8 percent both close behind.

“The showing traffic data suggests that buyers and sellers alike are undeterred from completing their real estate transactions,” added Lane. “It’s clear that real estate professionals have made adjustments and increased their efforts to make the most of this market.”

ShowingTime is the residential real estate industry’s leading showing management and market stats technology provider, with more than 1.7 million active listings subscribed to its services. Its products are used in 370 MLSs representing one million real estate professionals across the U.S. and Canada. Contact us at research@showingtime.com