Company culture is built and fostered inside the office as much as it is outside the office. When asked if their firm’s culture shaped their office space, nearly a quarter of broker-owners responded that their offices didn’t. Over half of the remaining brokerage leaders said that they were in the process of configuring one or more spaces to match their culture.

David Boehmig, president and founder of Atlanta Fine Homes Sotheby’s International Realty, said that his firm focuses more on collaborative and open spaces as they’ve progressed. Two out of three of his traditional high-end offices have minimized the use of drywall and doors, creating the sense of openness by using glass walls. Boehmig is quick to say “we are not like Google where everyone is sitting out in the open together, but the transparency helps people see who is in the office and helps carry energy through the office.” 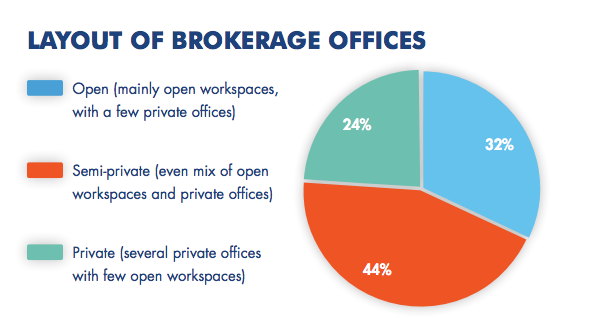 “We are not like Google where everyone is sitting out in the open together, but the transparency helps people see who is in the office and helps carry energy through the office.” — David Boehmig

In addition to leasing out unused office space, Fry is now transitioning some of his larger office spaces to accommodate multiple sales associates in groups of three to six depending on how frequently they are in the office. He shares that this “works great for mobile agents who are infrequently in the office.” To match the culture of sharing, RE/MAX of Reading created an oversized multimedia room that can seat 90 people comfortably or hold 200 people for an event. This room is a new feature within the existing building and allows the firm to host a variety of activities that bring people together, both for work and fun.

For some broker-owners, the ability to match office space and company culture can only be accomplished with a new office space. Kyle Whissel, broker-owner of Whissel Realty in San Diego, Calif., moved his primary office space from an office park to the hipster community of North Park. Whissel shared that he “wanted an office that promoted collaboration and fit the culture of the company.” The 2,200-square-foot space with an industrial chic feel now matches the culture of the company as well as the surrounding area.

Collaboration space is the most popular trend in real estate office design right now. Almost 75 percent of real estate offices incorporate open workspace into their office design. Open workspace is considered essential to creating synergy and allowing for work relationships to form and develop among sales associates. These two characteristics are central to the foundation and sustainment of many brokerages culture.

Collaborative workspace is predominant in each of Better Homes and Gardens GO Realty’s four office locations around the Raleigh/Durham area of North Carolina. Founded in 2009 by Jim Garman, the office spaces are designed to naturally disarm people with their casual settings. With over 95 percent open space in each office, no one has a private office, not even the managing broker. Instead, their sales associates use open-conversation spaces and “zen dens,” which consist of a chair, ottoman and small table. According to Alyssa Hellman, the director of the GO School of Real Estate, 65 percent of their 120 real estate professionals are millennials who spend 30 hours a week on average in the office. 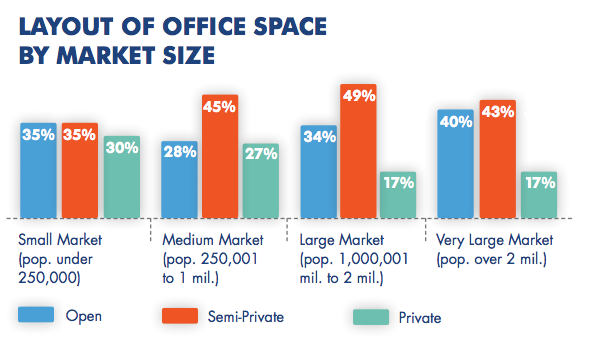 Open workspace is unique in that no two offices are alike, even within the same brokerage. Take a tour of the Better Homes and Gardens GO Realty offices and see how they’ve developed collaborative space in variety of styles.

Notice that none of their offices have a front desk. Instead of being greeted by one person, potential clients are welcomed by those in the office saying, “Welcome to GO.” Hellman shares that the lack of a front desk immediately removes the barrier between the sales associate and the client. It also fits the laid back and inviting culture of their brokerage.

A majority of brokerages across the country still use private offices to some degree, making semi-private the most predominant type of real estate office layout. Semi-private is considered an even mix between private and open workspace. National brands such as Weichert and Keller Williams focus on maintaining a 50/50 balance in their offices, with open spaces designated for a lobby, a training room and conference rooms.

A popular approach among brokerages for semi-private office design is café style. This office layout incorporates open seating areas, like those found at Starbucks, mixed with private office spaces. Three out of five of ERA King Real Estate offices in Homewood, Ala., have a central collaborative space mimicking a café, surrounded by private offices on the perimeter. Anna-Marie Ellison, broker of ERA King Real Estate, shared that the café area brings sales associates in the office together. Noting that even those who have private offices will choose to work in the café area because they like the collaborative experience.

The configuration of office space is not heavily impacted by market size. Semi-private is the predominant type of office design among real estate broker-ages in all markets. The number of traditionally private offices does decrease in markets with populations over 1 million people by roughly 10 percent.

REX Homes emailed its agents Thursday telling them to “find a new brokerage” and request “to transfer your license.”

10 ways rookie agents can get rolling their first year

Brokers and managers can help rookie agents get rolling by implementing these 10 activities for success.