Showing traffic sees year-over-year gains for the first time since February as the real estate industry turns to tech for virtual showings. 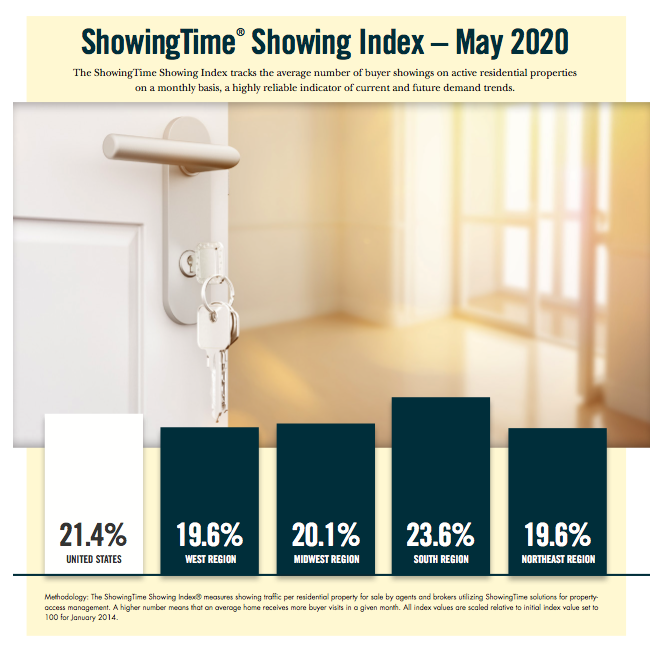 For the first time since February, U.S. showing activity was up year over year on the heels of increasing agent adoption of virtual showing technology to present listings. The loosening of local restrictions on showings throughout the country has also played a role in renewed buyer interest. Together, those two factors have contributed to impressive boosts year-over-year, showing activity in all four regions tracked by ShowingTime.

The South Region led the country’s improving buyer activity in May, with a 23.2 percent year-over-year increase, the region’s most significant jump in more than a year. The Midwest saw the second greatest increase, with a 20.1 percent spike, while the West and Northeast followed close behind with 19.6 percent year-over-year growth in both regions.

“The turnaround so far resulted in market imbalance with demand outstripping supply and pushing the prices up in many regions of the country,” said ShowingTime Chief Analytics Officer Daniil Cherkasskiy. “While showing traffic typically subsides mildly after Easter when it reaches a plateau for the summer months, this year looks drastically different as the busiest time is hitting us in early June. The increased buyer demand might be creating a feedback loop, inspiring sellers who would have previously given up on selling this time of year to make another attempt instead.”

“Since it first became clear that COVID-19 would have an impact on real estate, we’ve been dedicating as many resources as possible to help agents operate effectively,” said ShowingTime President Michael Lane. “Stay-at-home orders are forcing agents to seek out creative ways to show homes to buyers. We developed ShowingTime LIVE Video to make their jobs easier.”

The ShowingTime Showing Index, the first of its kind in the residential real estate industry, is compiled using data from property showings scheduled across the country on listings using ShowingTime products and services, providing a benchmark to track buyer demand. ShowingTime facilitates more than five million showings each month. Released monthly, the Showing Index tracks the average number of appointments received on active listings during the month. Local MLS indices are also available for select markets and are distributed to MLS and association leadership.