Home buyers were out in droves nationwide in June resulting in the second consecutive month of surging home showing activity, with agents seeing 50 percent more showings per listing according to data from the ShowingTime Showing Index.

It marked the third consecutive month of growing foot traffic in all four U.S. regions, a sign of the continued resilience of the U.S. residential real estate market and sustained buyer demand. The latest data from ShowingTime also reveal continued adoption of virtual showings, as the number of listings set up to allow both in-person and virtual appointments increased 28 percent in July. 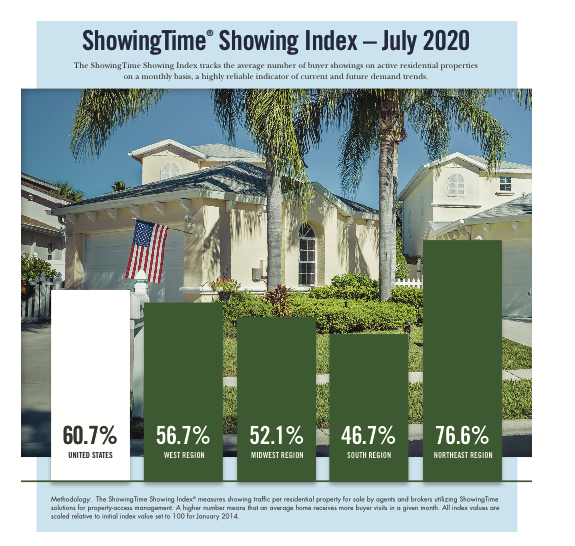 “Multiple existing trends continued and were amplified in July as buyers competed for a dwindling supply of homes, pushing the level of competition and prices higher across all major regions of the U.S.,” said ShowingTime Chief Analytics Officer Daniil Cherkasskiy. “Part of the imbalance can be attributed to the fact that potential sellers are not yet seeing the latest negotiated selling prices, which usually come out with a one-to-two-month delay.

“In previous years, July would be the month when real estate activity begins to slow down,” Cherkasskiy said. “In 2020, July became the peak month of the delayed busy season. A glimpse at August trends also suggests that demand is staying at this high level and may continue to do so through at least September.”

For the second consecutive month, the Northeast saw the most significant boost in year over year activity, with a 76.6 percent increase. The West followed, with a 56.7 percent jump, while the Midwest recorded a 52.1 percent increase and the South saw a 46.7 percent uptick.

“All indications point to sustained growth in buyer demand, and we’re committed to helping agents meet it,” said ShowingTime President Michael Lane. “The rate of agent adoption of ShowingTime LIVE Video continues to increase, which demonstrates its utility as a valuable tool to keep showings going when in-person showings aren’t possible.”

The ShowingTime Showing Index, the first of its kind in the residential real estate industry, is compiled using data from more than six million property showings scheduled across the country each month on listings using ShowingTime products and services, providing a benchmark to track buyer demand. Released monthly, the Showing Index tracks the average number of appointments received on active listings during the month. Localized MLS indices are also generated for select markets and are distributed to MLS and association leadership.

ShowingTime is the residential real estate industry’s leading showing management and market stats technology provider, with more than 1.2 million active listings subscribed to its services. Its showing products and services simplify the appointment scheduling process for real estate professionals, buyers and sellers, resulting in more showings, more feedback and more efficient sales. Its MarketStats division provides interactive tools and easy-to-read market reports for MLSs, associations, brokers, agents and other real estate companies, as well as a recruiting tool for brokers. ShowingTime products are used in 370 MLSs representing one million real estate professionals across the U.S. and Canada. For more information, contact us at research@showingtime.com.