At 37, Nicholas Palance speaks with the wisdom of someone who has witnessed disruption in not one, but two industries. His first career was in the music business at a time when the industry was being revolutionized by streaming services, social media and other innovations.

Having attended college with the founder of music-sharing platform Napster, a disruptor before the word gained traction in the modern lexicon, he wasn’t all that surprised when his supervisor at EMI recommended he begin looking for other work. Palance’s mother was a real estate professional, and he began dabbling in the profession to supplement his income. It soon became a full-time career. 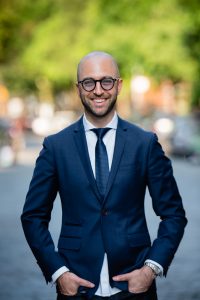 He started as an agent at Brown Harris Stevens in New York and advanced to become the firm’s youngest-ever VP/Director and was then promoted to youngest-ever EVP/Managing Director of Sales. He began noticing ways that technology could help agents be more effective and profitable.

There was the time he was working with an Italian homebuyer who was in New York to look at investment properties. The buyer had a condensed schedule, and the overriding concern was the capitalization rate for each property. After touring numerous properties over the course of a few days, they met to review the choices. “I’m doing this on my iPhone and there are all these disparate functions,” Palance explains, “and it was taking away from the excitement of the moment.”

Palance realized that being able to deliver that information as they were viewing each property would enable his clients to see their decisions more clearly.

Then, there was the time he was hosting an open house, and he hit it off with a potential homebuyer who toured the property. But at the end of the day, he looked at his sign-in sheet and the person’s email address was illegible.

After launching the eponymous Nicholas Palance Real Estate LLC firm in 2018, in December he rolled out a mobile-only platform, Stacks – for Agents, by Agents, which had been in development for several years. He hopes to harness technology to empower real estate professionals.

“It’s like a Fitbit for [real estate professionals],” he muses, “a Swiss Army knife.” It’s designed to address some of the pain points he himself had experienced as an agent and team leader. It offers the data analytics an agent needs for their clients, paired with tools like a mortgage calculator and closing costs calculator. 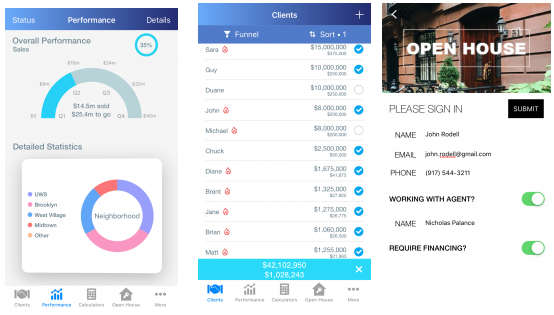 Stacks is available at the App Store for $19.99 a month or $199.99 a year; Palance, whose goal is to reach 250,000 users this year, is currently offering a rewards program that gives users a free month when they refer it to their contacts, who receive two free months.

Palance believes that Stacks distills the most important tasks, freeing agents from spreadsheets and CRMs.

The inspiration for the name came in part from the Showtime program “Billions,” Palance says, in which every billion dollars equals one stack. “Creating stacks of clients will lead to stacks of cash,” he laughs.

“I recognized the need to make the data analysis portion fun and distinguish my product and brand from the CRM traditional segment of the market, which I don’t believe Stacks falls squarely into. I like to refer to it as APT, which stands for Agent Prop Tech (a play on the abbreviation for apartment) versus the CRM segment because it’s more about using Stacks’ tools combined with the agent’s human intuition than ineffective, automated features like impersonal email drip campaigns.”

Although he declines to give the number of downloads from the App Store so far, it has received positive reviews from early adopters.

Just last year, when the app was still in development, Palance overheard a real estate agent having a discussion with a client at a coffee shop.

“My ears pricked up,” he said. “The seller was going to meet with a wealth advisor and all he needed to know was what he would net for the property if he sold for X. He must have asked six times and wasn’t getting the answer because she couldn’t calculate it on the spot. If the app would have been ready, she would have looked like a rock star.”