Annual gains in homeowner spending on improvements are expected to moderate across more than half of the nation’s largest metropolitan areas in 2019, according to new projections from the Remodeling Futures Program at the Joint Center for Housing Studies of Harvard University.

While no major metros are projected to see spending levels decline in 2019, the center’s model indicates that the pace of spending by homeowners will slow in 29 of the 49 major metros tracked relative to their estimated 2018 gains. Annual growth in improvement expenditures is projected to fall to the lowest rate in three years in 22 of these metros.

“Metros with cooling home prices and sales activity are not able to sustain the same pace of investment in home improvements as in recent years,” says Chris Herbert, Managing Director of the Joint Center for Housing Studies. “Our projections show especially pronounced slowing in markets such as San Antonio, Kansas City, Pittsburgh, Buffalo, and Dallas.”

“Despite the broader deceleration, remodeling gains should remain strong and even accelerate through year-end in some areas of the country including Orlando and Las Vegas where remodeling permitting, house prices, and homebuilding have picked up,” says Elizabeth La Jeunesse, Senior Research Analyst in the Center’s Remodeling Futures Program. “Regionally, the strongest growth in 2019 is expected to be among metros in the West, paced by projected growth of 8 percent or more in Sacramento, Denver, Seattle, Tucson, San Jose, and Las Vegas.” 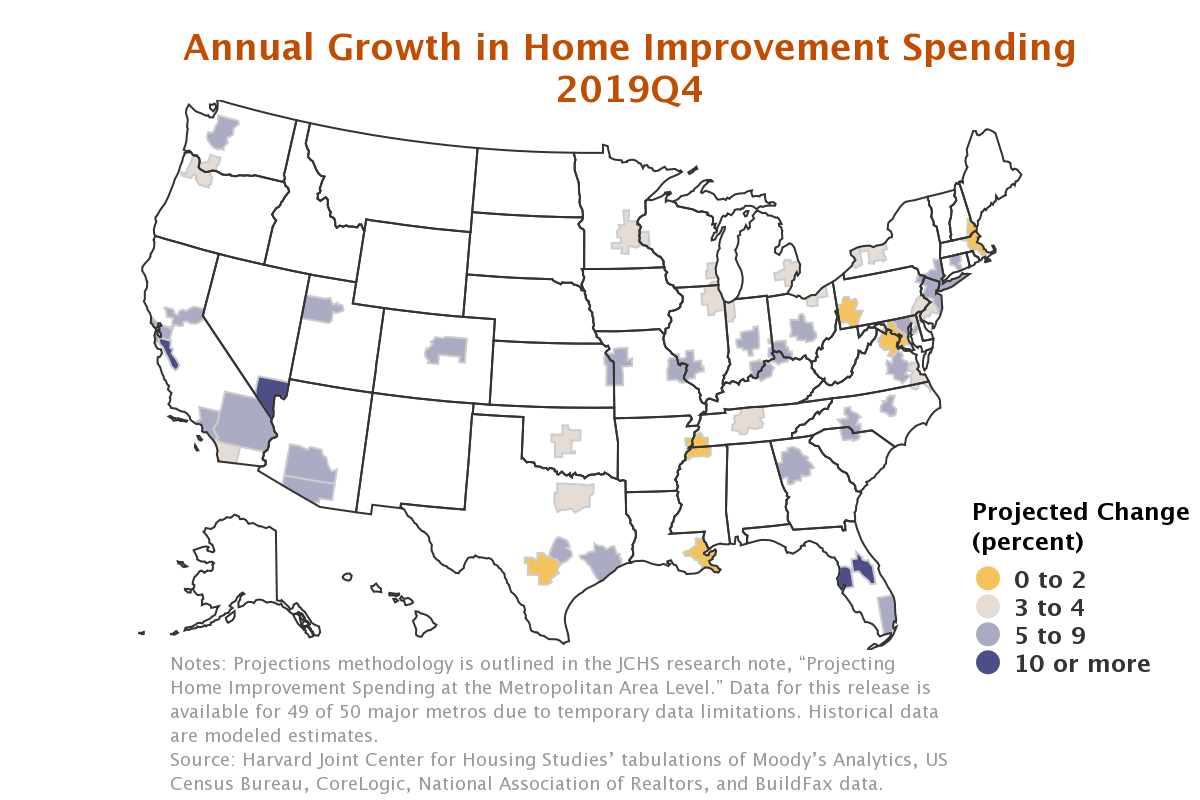 The Joint Center for Housing Studies’ Metro Area Home Improvement Projections are released annually in the Spring and provide a short-term outlook of home improvement spending to owner-occupied homes across 50 major metropolitan areas. The indicator, developed with biennial estimates from the American Housing Survey, is designed to project the annual rate of change in spending for the current quarter and subsequent four quarters, and is intended to help identify future turning points in the local business cycles of the home improvement industry.

The Remodeling Futures Program, initiated by the Joint Center for Housing Studies in 1995, is a comprehensive study of the factors influencing the growth and changing characteristics of housing renovation and repair activity in the United States. The program seeks to produce a better understanding of the home improvement industry and its relationship to the broader residential construction industry.