America’s No. 1-ranked real estate agent, Ben Caballero of HomesUSA.com of Dallas-Ft. Worth, Texas, has been honored by Guinness World Records, the global authority on record-breaking achievements, for selling 5,801 homes last year. Caballero broke his own industry-first Guinness World Record title for 3,556 verified home sales in a single year. He continues to hold the Guinness Worlds Record title for “Most annual home sales transactions through MLS by an individual sell side real estate agent – current.”

Steve Murray, president of REAL Trends, an industry-leading research and consulting group, notes that “Among the thousands of real estate professionals we have recognized over the years, no one has come close to breaking Ben’s achievements. Ben smashing his own phenomenal Guinness World Record is stunning.” 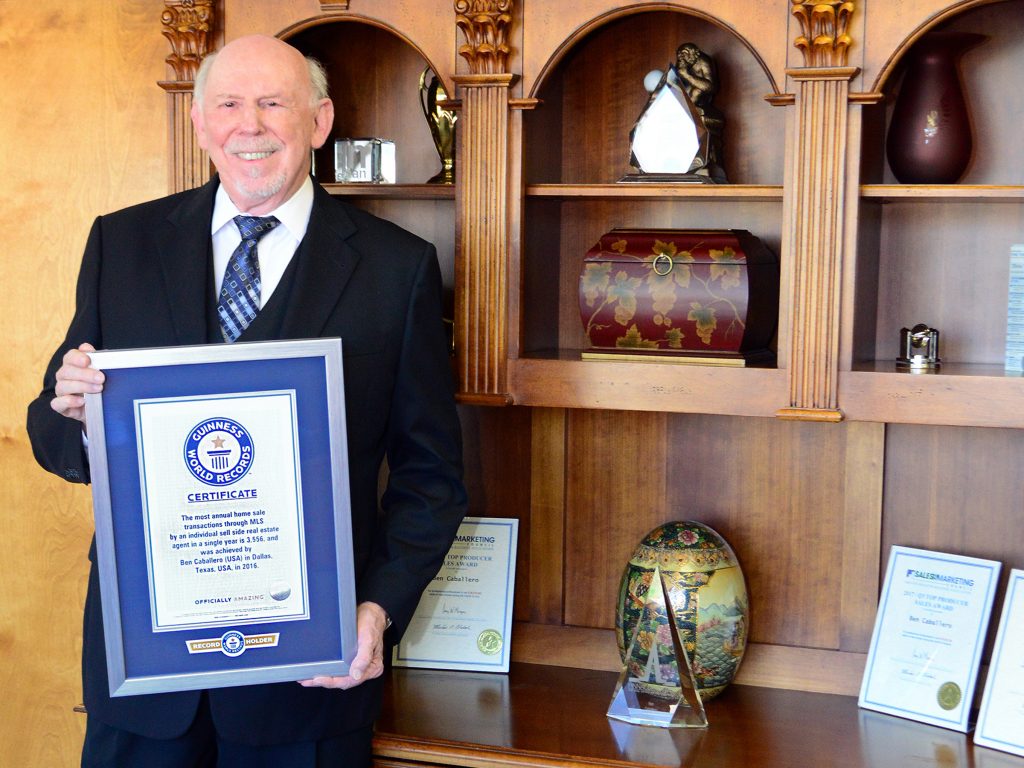 News reports have called Caballero’s home sales feats “truly amazing.” Last year he listed and sold more homes through MLSs than the top two ranked teams of agents combined, according to the latest REAL Trends + Tom Ferry “The Thousand” list. He not only sold more than three times the sales volume of the No. 2-ranked individual agent, but he also sold more homes than the next seven top-ranked agents combined.

Caballero’s new record translates into selling an average of more than 100 homes a week, or nearly 16 home sales a day, every single day of the year. Caballero averaged almost three home sales every business hour.

How Caballero does it

Caballero does not cater to titans of Wall Street or housewives of Beverly Hills. He is the broker/owner of HomesUSA.com, based in Dallas-Ft. Worth, Texas, and specializes only in new homes sales for 60-plus builders in Dallas-Ft. Worth, Houston, Austin, and San Antonio.

Caballero invented the HomesUSA.com platform, an innovative online technology for builders that allows him to achieve these remarkable numbers.

Caballero was a builder for 18 years and became a real estate agent at the age of 21. He developed his online platform in 2007. Builders interested in learning about Caballero’s services can contact HomesUSA.com directly at (800) 856-2132 x300 or email ben@homesusa.com.

GUINNESS WORLD RECORDS (GWR) is the global authority on record-breaking achievement. First publish in 1955, the iconic annual Guinness World Records books have sold over 141 million copies in over 40 languages and in more than 100 countries. Additionally, the Guinness World Records: Gamer’s Edition, first publish in 2007, has sold more than 4 million copies to date. Guinness World Records’ worldwide television programs reach over 750 million viewers annually and more than 3.7 million people subscribe to the GWR YouTube channel, which enjoys more than 328 million views per year. The GWR website receives over 20.5 million visitors annually, and we have over 15 million fans on Facebook.

About Ben Caballero and HomesUSA.com®

Ben Caballero holds the current Guinness World Record title for “Most annual home sale transactions through MLS by an individual sell side real estate agent.” Ranked by REAL Trends as America’s top real estate agent for home sales by since 2013, Caballero is considered the most productive real estate agent in U.S. history. He is the only agent to exceed $1 billion in residential sales transactions in a single year; a feat first achieved in 2015 and repeated each year until 2018 when he achieved more than $2 billion. An award-winning innovator, Caballero is the founder and CEO of HomesUSA.com, Inc., works with more than 60 home builders in Dallas-Fort Worth, Houston, Austin and San Antonio. He recently released a podcast series available on iTunes and Google Play. Learn more at HomesUSA.com |Twitter: @bcaballero – @HomesUSA | Facebook: /HomesUSAdotcom. Infographic is here.