Undoubtedly, COVID-19 will initiate and/or accelerate a series of changes within the real estate industry, from the way we design office spaces to how much space each employee and business really needs.

So, to get a glimpse into the public’s outlook on the future of the industry, we went straight to the data. Specifically, we analyzed traffic data for commercial listings on CommercialCafe and the popularity of industry-related keywords in online searches using Google Trends data. We also surveyed visitors to the CommercialCafe and Property Shark websites about how COVID-19 had affected their search for a new office space. Their responses signal a sense of optimism and faith in the ability of business to resume as usual, despite the slowdown. 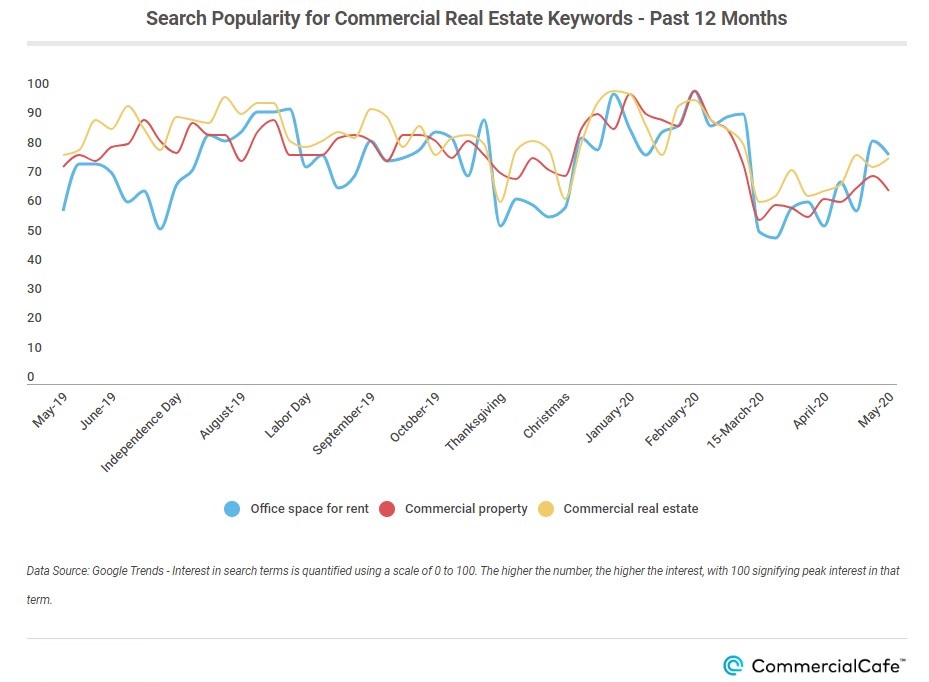 In mid-March, headlines about the spread of the coronavirus gripped the public’s attention. Consequently, Google Trends data showed a predictable decrease in searches for three important commercial real estate keywords. Nevertheless, the popularity of terms such as “commercial real estate,” “commercial property” and “office for rent” gradually recovered throughout April and the first half of May.

As you can see, the popularity of these terms varies during the course of a year due to the seasonality of tenant interest in finding a new office space, as well as national holidays ― although the variance is typically less pronounced than the recent drop we observed following the lockdown.

A two-month timeline for commercial property searches on CommercialCafe, a real estate listings platform, revealed that March 15 was the lowest point for traffic, generally aligning with the beginning of the crisis in the U.S. In fact, commercial searches that week dropped 27% ― the most significant decrease in weekly numbers in the survey period.

Nevertheless, by the end of March and beginning of April, declines in traffic had slowed compared to previous weeks. Then, between April 5 and April 25, CommercialCafe listing searches registered their first uptick. Later, they increased 3% during the end of April and first of May, followed by another 8% a week later. Overall, the data points toward a slow, but steady recovery.

One of the questions CommercialCafe visitors were asked related to the status of their office space searches. In response, approximately 44% said that they were not only still looking, but that they were also ready to commit to a lease if they found the right space. Another 39% reported being unsure about their next move or that they had given up looking altogether for the time being. Meanwhile, roughly 8% continued their searches, but less actively, whereas another 8% were on the lookout for any changes in the office market.

Regarding whether the pandemic had changed their office selection process, 38% of respondents said nothing had changed. However, about 25% had either put their office search on hold or chosen to visit fewer locations. Another 36% were making full use of available remote-viewing technologies, with 22% relying on pictures and virtual property tours, and 14% using virtual reality staging software.

For more details about how businesses, entrepreneurs and other prospective tenants view the coronavirus crisis’ effect on the commercial real estate market, read the full article on CommercialCafe.

As homebuyer demand wanes, housing starts continued to fall in July as builders are wary of accumulating a backlog of inventory.