In the four weeks ending on September 23, 22.9 percent of homes sold for more than their asking price, according to Redfin (www.redfin.com), the next-generation real estate brokerage. More than one-in-five sounds like a lot, but it represents a 2.6 percentage point decline compared to the same period last year when 25.5 percent of homes sold above their list price. The share of homes that sold above list hasn’t been this low since 2016 and has been declining since its peak of 29 percent in June.

“With home price growth slowing to 4.7 percent in August, and a record-high share of sellers dropping their prices, the fact that fewer homes are selling above their asking price is another indication that competition is getting less intense than it has been in recent years,” said Redfin senior economist Taylor Marr. “Inventory pressures are easing in the hottest markets, which is welcome news for homebuyers who are increasingly able to submit an offer without competition and get bids accepted without offering above list price.” 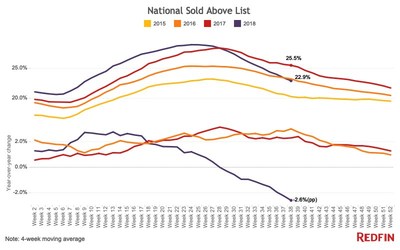 The change is most stark in the markets that have been the most competitive. In Seattle, Denver, Portland and the Bay Area, the share of homes that sold above list is declining rapidly. For example, in Seattle, 30.3 percent of homes sold above list in the four weeks ending on September 23, down from 50.6 percent during the same period last year. The share of homes selling above list hasn’t been this low in Seattle since 2014.

While many metro areas are following the national curve, it’s worth noting that a few metros are bucking the trend. Competition is high in more affordable, inland metros like Buffalo, New York, Indianapolis and Las Vegas. Inventory has been declining steeply in these metros and as a result, the share of homes selling above list price continues to be higher than it was last year.