As a New York-based banker, George Benoliel has witnessed much disruption.

After one deal in which the Benoliels selected a property and made an offer without representation, Georges was perturbed that the seller’s agent collected a large commission. He had a revelation. “I asked my wife to become a [real estate] broker.” 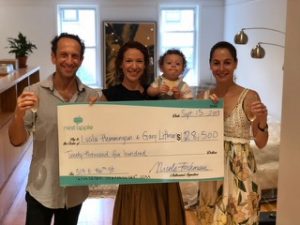 After NestApple closes on a deal, co-founders Georges (left) and Nicole Benoliel (right) deliver a big rebate check and create an image that is shared via social media. The average rebate is $22,000, says Georges.

Initially, Nicole Fishman-Benoliel began acting as a broker when purchasing personal investment properties. Then, she and Georges helped friends and family with real estate transactions. Word spread, as did demand for their services.

A dual citizen of France and the United States, Benoliel is vocal about the U.S. brokerage commission model.

“Technology and the internet have greatly diminished the role of full-service real estate agents by making it easy to search for homes,” he says. “These days, buyers select what they want online; they’re super-savvy about the market. The market is so liquid. We can’t understand how fees have been unchanged.”

A year ago, the Benoliels launched NestApple, which is licensed in New York and Connecticut with plans to expand to New Jersey. They started out representing homebuyers and rebating 2 percent of the sales price. In addition, they make a donation of 10 percent of the remaining commission to a charity of the buyer’s choice. If none is identified, they make a contribution to the South Bronx Educational Foundation.

At the one-year milestone, Georges reflects on some unexpected lessons from their experience. “I wanted to market myself as a fintech company initially,” he said. “I had a great platform. But at the end of the day, real estate is not about technology, it’s about emotions. People want that human connection.”

He adds, “In the long-term, technology will not be able to replace the intermediary.”

Georges has kept his day job, but Nicole left her law practice to focus on their brokerage. Georges oversees the NestApple.com platform, recruitment, strategy, and publicity. After a deal, Georges photographs their clients holding large checks, and then shares the image through social media. They maintain a blog on real estate topics and use Google Adwords to spread the word. He also credits good old-fashioned word of mouth.

Meanwhile, Nicole focuses on the transactions. They operate from their home, so overhead is minimal.

“We get phone calls nonstop,” says Georges, adding that it’s not unusual for someone to call on a Sunday night. “They’ve been to an open house. They’ve been preapproved for a loan,” he says, and they want to make an offer.

He admits that their business model isn’t for everyone. They do not routinely accompany prospective buyers to showings but make arrangements with the listing agent for the buyer to tour the property. Benoliel says they’ve improved the home-buying experience for clients who don’t want a “Realtor walking behind them asking if they like it.”

They do offer many of the other services a traditional brokerage offers—they send leads from their database of listings to match a client’s profile and once a property is identified they will run a pricing analysis by pulling comps, define a negotiation strategy, place an offer, and make introductions to real estate attorneys, mortgage bankers, contractors, and inspectors.

NestApple is now averaging one sale a week and is quietly rolling out plans to offer listings to sellers for a 1.5 percent commission. Georges says they offer the same services to sellers as that of a traditional brokerage–professional photos, staging, marketing, syndicating through real estate websites, and set appointments for showings and open houses.

Comparing the startup to Uber and Airbnb, Georges says, “I want NestApple to be the largest brokerage company in the tristate area,” noting that their business model enables one agent to be much more efficient than an agent working in a traditional brokerage.