On June 18, the Trump Administration announced its formal nomination of Office of Management and Budget (OMB) Associate Director Kathy Kraninger to be Director of the Consumer Financial Protection Bureau (CFPB).

The White House announcement came just days before June 22, when Acting CFPB Director (and OMB Director) Mick Mulvaney would have had to depart the agency under a Federal Vacancies Reform Act provision that limits an acting appointee’s term to six months. The naming of a successor to Mulvaney triggers another provision in the Act that allows Mulvaney to serve until the Senate confirms, rejects, or returns the nomination.  If the Senate rejects the nomination or if Kraninger withdraws for any reason, President Trump could nominate another candidate and Mulvaney could stay until that candidate is confirmed or an additional 210 days. If the Senate does not act on Kraninger’s nomination before the end of this Congressional session (currently scheduled for December 14), Senate rules require that it must be returned to the President, which triggers an additional 210-day period that would allow Mulvaney to serve as acting director until approximately July 2020 or until a subsequent nominee is confirmed.

Kraninger’s confirmation already promises to be a contentious process.  Several consumer group representatives immediately attacked the appointment as a Trump Administration ploy to keep Mulvaney on indefinitely, given Kraninger’s lack of consumer finance experience.  Senator Elizabeth Warren (D-MA) has tweeted that she would put a hold on the nomination—and fight it at every step—until Kraninger turns over all documents about her role in the Administration’s ‘zero tolerance’ immigration policy that is “ripping kids from their parents.” 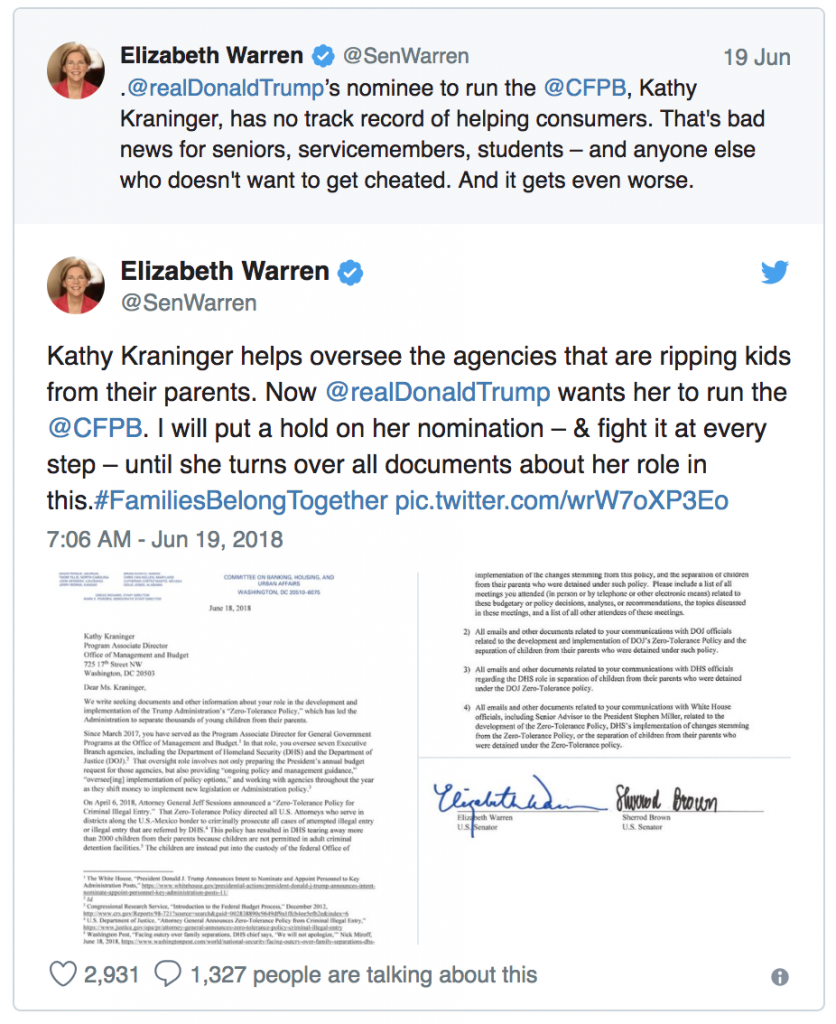 Further complicating any prediction on how the selection of a new CFPB Director will play out is the ongoing legal challenge to Mulvaney’s appointment brought by Leandra English, former CFPB Director Richard Cordray’s chosen successor.  The D.C. Circuit Court of Appeals held oral arguments in April on English’s appeal of an adverse lower court decision and still could potentially rule that English is entitled to serve as Acting CFPB Director.