The numbers are in, and it isn’t pretty!

Recently, we completed the year-end update of our brokerage benchmark report, which reveals fascinating financial and operational industry trends. Each metric tells a story, but none tells a louder one than Retained Company Dollar.

Retained Company Dollar (Retained CO$), also known as Gross Margin, is the portion of the commission (or fees) that a brokerage keeps after its agents take their cut. It’s been well documented that Retained CO$ has been in a long-term decline, with a myriad of reasons precipitating this downward trend. This decline has been substantial enough that many of the traditional brokerage firms have had to radically alter the way they do business to stay in business. Brokers have been longing for an end to the carnage that’s placed tremendous pressure on their bottom line.

In 2019, Retained CO$ retreated to an all-time low, with the national average dipping below 14%. It’s hard to believe that, on average, brokers are only keeping 14 cents of every dollar of commission earned! You won’t find many broker/owners who’ll deny that it’s been a grind running their businesses in recent years. 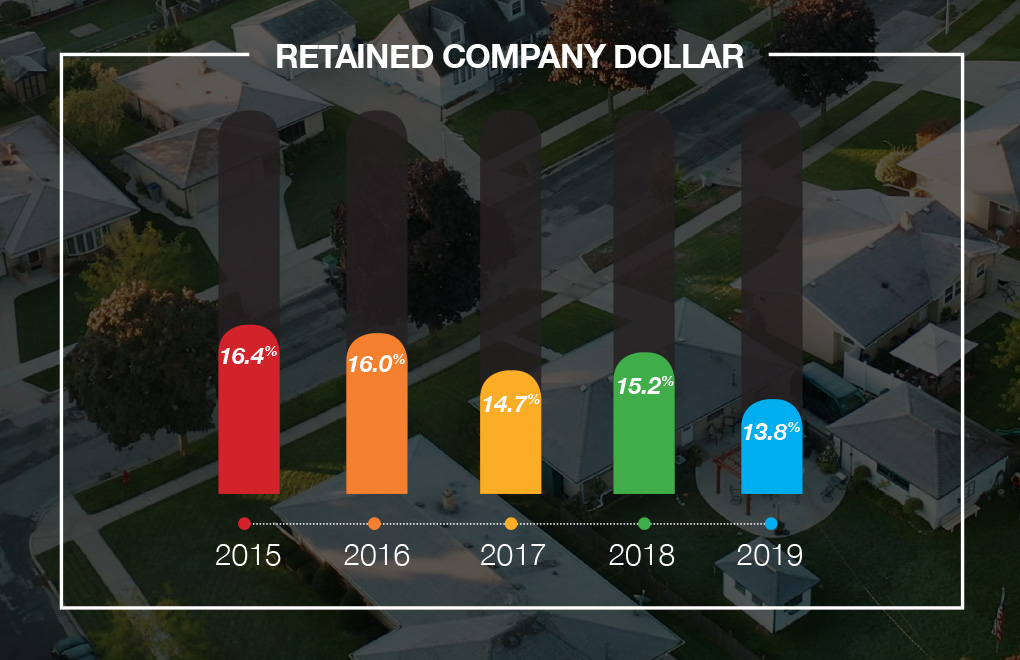 It’s important to caveat that this 13.8% average is an actual mean average of all the brokerage firms for which we have data. Our database includes traditional, uncapped graduated-commission-plan firms, capped-plan firms, flat-fee firms, and other hybrid models. Retained CO$ varies wildly between each of these types. This mean average also includes widespread geographical diversity, incorporating higher-Retained-CO$-firms on the East Coast alongside firms on the West Coast that tend to sport lower Retained CO$.

However, these intricacies don’t take away from the greater trend. Even if we segmented our benchmark using the qualifiers mentioned above (which we do for our valuation clients), we’d see the same downward trend. It’s a frustrating trend that begs the question, is there an end in sight?

At REAL Trends, we believe that the end is in sight and that this end will be in the very near term. Ongoing pressure on margins will reach a point of exhaustion, and an equilibrium will be found that allows brokers of all types to make money in this industry still. As our clients do so, very intently, we’ll continue to keep a close eye on Retained CO$.