My new favorite by Ken Auletta covers the messy evolving world of ad agencies, media agencies, the online giants and everything in-between. He tells the story of what’s going on in the $1.5 to $2.0 trillion advertising and marketing world.  Bottom line, it’s hugely informative and entertaining. 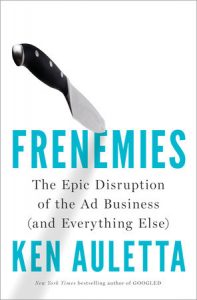 He tells the story of a media advisory firm, for example, that has assembled what is essentially a huge spreadsheet.  With 200 million rows (that’s us people) and over 40,000 columns (these are facts about us) that they’ve assembled so they can target us with ads for their clients.

This firm says that ‘no names’ are attached to these rows.  Well, except they have a separate database where the names are kept, and ‘they promise’ never to use the names along with the other data.  This isn’t Facebook or Google, and according to the author, there are dozens of companies with such databases.

If you want to understand what is going on the media and ad world – this is the book to get and read.

The market is quickly rebalancing and, after two years of unprecedented growth, home values fell slightly from June to July, according to the latest market report from Zillow.